Mexican architect Delfino Lozano has renovated a house in Zapopan, Mexico to include a mix of Mediterranean and Mexican aesthetics, which he describes as "Mexiterrean".

Called Casa A690, the property is a three-storey home that dates back to the 1970s.

It comprises a rectangular ground floor volume and two-stepped blocks on top. The exterior walls are rendered white, while its flat rooftops are covered in terracotta tiles that add warmth to the otherwise stark palette.

Lozano developed the aesthetic of the overhaul to be a fusion of Mediterranean and Mexican architecture and materials.

"We use the term Mexiterraneo to describe the materials and feeling we try to give our projects, in which we interpret the Mediterranean architecture – simple, pure materials – and mix it with our Mexican traditional architecture, in this case represented by the architecture," the architect told Dezeen, who also goes by Fino.

Several courtyards are slotted within the property, including one with a grey-brick feature wall.

The project also features several arched and circular windows, openings and doors, while a linear staircase cuts through the home in the main living area and leads to a home office.

Inside, spaces feature grey concrete walls and cabinets and contrasting elements of dark wood, as seen in built-in cabinets, benches and furniture. 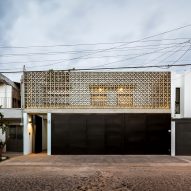 An outdoor pathway passes along the side of Casa A690 and leads to the entrance, foyer and central stairwell.

A kitchen and living area is located towards the front of the property.

Another area on the ground floor accommodates a double-height dining and sitting room with sliding glass doors that open onto a grassy courtyard.

"The pursuit of generating interesting paths when moving from one zone to the other gave value to the volumes and informed with the proposed design," said Lozano.

"As a result, the rooftops became usable terraces and architectural elements like the stairs turned into sculptures."

A mezzanine with a desk overlooks the living room below, and two bedrooms and a home office are also located upstairs.

The top floor contains a master bedroom with an en-suite bathroom and a terrace, and can also be accessed from an outdoor stairwell.

The layout of Casa A690 is similar to Casa Azul that Lozano also renovated in Zapopan, which also has courtyards slotted within the main volume.

The architect's other projects include  brickwork dwelling Casa G in the Mexican city, and the renovation of a traditional house in Guadalajara.