Designed for a family of four, Casa Azul occupies a 300-square-metre rectangular plot in the city – part of the Guadalajara metropolitan area – with neighbours abutting its longer northern and southern sides.

Local architect Lozano fronted the exposed western and eastern facades with decorative walls made of Jalcreto – a lightweight concrete – to bring light into a pair of outdoor spaces.

"The sunlight was treated with the work of concrete lattice to protect the sun and, at the same time, it helps capture indirect sunlight on both facades," said Lozano.

On the west, the latticework is set atop black folding garage doors and fronts the property and car park, which is set underneath a cantilevered first floor.

At the other end of the residence, the concrete wraps a back garden planted with a small tree.

Lozano also wanted to ensure that the house received plenty of natural daylight and ventilation. A pair of courtyards are slotted along the southern and northern walls to bring light in from above through windows inside.

Rooms are arranged around these voids in interlocking volumes that vary in height from one to two storeys to further aid the movement of light and air.

"The land with orientation west-east routed the design to create the volumes," said the architect.

"It is noticeable having considerate heights and cross ventilation to generate and maintain a comfortable interior climate."

A courtyard, paved with reddish-toned burned bricks laid in a parquet pattern, runs along the northern wall to lead from the main entrance to the garden at the rear. It also features a concrete outdoor stair that leads up in the opposite direction to a room with a view to the street.

A doorway at the bottom of these steps opens into a hallway, where the main staircase comprising a heavy concrete base and wooden steps is placed.

Across from the entrance, there is another doorway that leads into the second courtyard on the southern side of the residence. Windows in the walls surrounding the yard are placed high up to light the upper storey.

On the ground floor, the main living area is placed at the back of the house, including a single-storey kitchen and dining room, and a double-height living room.

Sliding glass doors open from the latter onto the garden, with a second big window placed above fronted by the decorative concrete screen. The two-storey high walls on the other side are punctured with a pair of openings: one on the ground floor leads into the hall, while the higher one is placed to provide a view from the staircase.

On the first floor, the master bedroom and adjoining terrace is set to face the garden, while a pair of identical bedrooms with en-suite bathrooms occupy the other side.

The architect chose a neutral material palette of exposed concrete with blue-painted walls, and black ironwork on the exterior.

Inside, white-painted walls and wooden flooring is also intended to complement elements of exposed concrete. Decorative mosaics line the walls of the bathrooms with patterns that mirror that of the latticework on the exterior.

Casa Azul is located in the north of Zapopan, where the Lozano has also built a residence with an elevated brick games room and a house featuring pine joinery and an under-stair larder. He is one of several young architects working in and around Guadalajara, which has become Mexico's architectural hotspot. 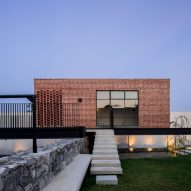