The total number of people visiting Dezeen grew by 8.5 per cent, with 27,456,069 different users visiting the site throughout the year, according to Google Analytics.

The USA remained our biggest audience, with the UK in second place again. But the biggest growth came from India, which is now home to our third-largest audience.

Dezeen's social media audience grew 17.5 per cent to over five million across all platforms. We hit major milestones on Instagram, where we now have more than two million followers. We topped a million followers on both Pinterest and Facebook and hit 100,000 YouTube subscribers and LinkedIn followers. 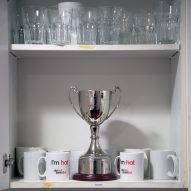 Our Twitter audience is just short of a million followers while our WeChat account, which we launched this year, has been growing at an incredible 12 per cent per month.

Our readers made a record 28,652 comments in 2019, which is an increase of over 25 per cent on the previous year. This makes Dezeen easily the most commented architecture and design site in the world.

With 160,000 daily subscribers and 50,000 people on mailing lists for Dezeen Jobs, Dezeen Awards and other services, that means we have over half a million subscribers in total.

Dezeen also celebrated a record number of entries to Dezeen Awards, with over 4,500 architects and designers submitting projects in 2019. The inaugural Dezeen Day conference, held in London in October, sold out, with a packed audience of 450 people attending.

Dezeen also added two more awards to its haul of over 40 accolades. We were named Editorial Brand of the Year at the IBP Awards in November while Dezeen Awards was named Best New Event at the Awards Awards 2019.

A huge thanks to all our readers and wishing you all a happy new year!