Architecture firms BIG and WXY have unveiled a masterplan for Downtown Brooklyn that aims to improve the area's pedestrian experience with playful furniture, expanded sidewalks and improved crossings.

Called the Downtown Brooklyn Public Realm Action Plan, the project will extend from Columbus Park to the Barclay's Center.

The masterplan was created following a comprehensive study of the neighbourhood's public spaces – including streets, sidewalks, plazas, parks, alleyways, intersections and underutilised sections, according to BIG.

"The plan draws upon the district's existing conditions, systems, land uses and policies to create a bold design vision that is uniquely Brooklyn, provides a greener, safer pedestrian and bicycle experience, and unlocks projects, initiatives and pilots for a more vibrant public realm," BIG added.

"A place where residents, workers and visitors can enjoy gathering outdoors, practice sports and celebrate the diverse culture of Downtown Brooklyn."

The international firm is working with urban designers from New York firm WXY Architecture and Urban Design and landscape firm MNLA to realise the project, with construction slated to start next year. It will also collaborate with Sam Schwartz Engineering on the transportation-related improvements. 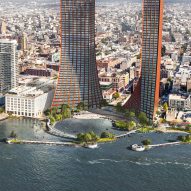 Images show pink, blue and green sidewalks and roadways furnished with sculptural benches, chairs, tables and plants. The use of bold colour is similar to that featured in Copenhagen's Superkilen park, which BIG completed in 2012 with landscape architects Topotek1 and artists Superflex.

A raised walkway and a bright orange bus shelter with potted greenery spilling from its roof are among other features.  A group of public showers and large circular hammock installations are also included in the additions to the neighbourhood's parks.

"The proposal paints the already lively character of the neighbourhood with a distinct colour palette and new public furniture collections," the firm continued.

"Brooklynites can enjoy a cohesive streetscape experience, one with improved walkability, pedestrian and cyclist safety, double the greenery and new art beacons."

Maps of the project indicate which streets will be "demapped" for pedestrian-only use, locations of improved crosswalks and areas where pedestrian space and sidewalks will be expanded.

BIG was founded by architect Bjarke Ingels in 2005, and has offices in Copenhagen, New York and London. The firm also recently unveiled plans to redevelop a parcel on the Williamsburg waterfront in Brooklyn, which includes a new beach and two skyscrapers.

In 2018, WXY also revealed a masterplan to revitalise a portion of Brooklyn Navy Yard as part of a project that has seen the adaptive reuse of old warehouses and ship-building facilities in the industrial site.