Work is set to start again on Santiago Calatrava's Greek Orthodox church in Downtown Manhattan, over two years after it was halted because the archdiocese failed to pay construction fees.

Work commenced in 2014 but site contractor Skanska terminated the project in 2017 due to the Greek Orthodox Archdiocese of America's (GOA) "defaults in making payment under the owner contract," according to Pappas Post.

Cuomo's announcement came as he welcomed Archbishop Elpidophoros – bishop of the Ecumenical Patriarchate of Constantinople – to New York City 2 January.

He also revealed that Elpidophoros will serve as honorary chairman of a new 13-member board, called The Friends of Saint Nicholas, which will be responsible for raising money for the construction of the church and conducting audits. 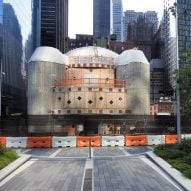 Calatrava was enlisted to design the St Nicholas Greek Orthodox Church and National Shrine to replace the community's former church at 155 Cedar Street, which was destroyed during the collapse of Two World Trade Center. It was initially slated to open in November 2018.

Under the new leadership, the building is expected to be completed by 11 September 2021 – 20 years after the 9/11 terrorist attacks.

The Spanish architect's project is already partially constructed nearby at 130 Liberty Street, and near to the 911 memorial that marks where the World Trade Center's twin towers once stood.

Calatrava's church features a central dome-shaped structure that will be clad in white Vermont marble. The design is influenced by Istanbul's Hagia Sofia, as well as the Church of the Holy Saviour in Chora also in the Turkish city.

"The rebuilding of Saint Nicholas Church that was destroyed on September 11 is a moment of coming together and healing not only for the Greek Orthodox community but for all New Yorkers who lived through that horrific day," said Cuomo.

"This house of worship will serve as a reminder that our collective faith is something we can always count on to move past our painful memories and build a better tomorrow." 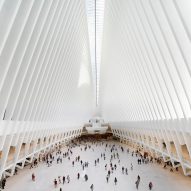 Photograph is by Jim Henderson.