Foster + Partners has unveiled a proposal for Chinese e-commerce company Alibaba's offices in Shanghai that will be built within a giant grid.

Alibaba Shanghai will be manufactured off-site before being built on Xuhui Riverside, where it will overlook the Huangpu River and Pudong Central Business District.

Foster + Partners designed the Alibaba offices alongside a giant public space that will allow passersby to observe the retailer's "unique working culture" from outside.

"We are delighted to be designing the new Shanghai office for Alibaba, the world’s largest online retailer and e-commerce company," said Luke Fox, head of studio at Foster + Partners.

"Our design emphasises the importance of communication, the integrity of the working community and above all, the creation of an image that reflects the standing of Alibaba," he explained.

"The scheme is truly designed from the inside out, centred on a dynamic, sheltered public space capitalising on its amazing location with its views of the Huangpu River and the Bund." 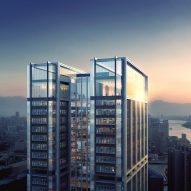 The exterior's orderly, gridded form will be visible inside the office in the building's central public space or "urban room".

This space will have a pixellated massing developed by Foster + Partners using a genetic algorithm – a type of algorithm often used in computer science to solve optimisation problems.

"The algorithm combines several aspects that are crucial to the project such as, being highly responsive to the environmental conditions, maximising outside views, and the specific area requirements for different functions, to create the most appropriate form," explained Foster + Partners.

"The design optimises the massing to provide the best year-round user comfort in the central public space, protecting it from strong winter winds and the harsh summer sun, while creating tailored workspace solutions for the different departments at Alibaba."

Once complete, the pixelated core of the building will host a series of terraces and viewing platforms, alongside the main entrances for employees.

According to Foster + Partners, this form is designed for transparency to provide the public with a "glimpse into the world of Alibaba" and employees with views outside.

The studio will develop the interiors of Alibaba Shanghai so that its desk arrangements, break-out spaces and meeting rooms all encourage collaboration and teamwork.

Natural light and external spaces will also form a key part of their design in a bid to help Alibaba employees be focused and engaged.

Founded in 1967 by Norman Foster, Foster and Partners is an architecture studio with offices worldwide and headquarters in London. Other recent proposals by the studio in China include the China Merchants Bank headquarters in Shenzhen.

Elsewhere, the studio also recently hit the headlines after it revealed visuals for the 305.3-metre-high Tulip tower in London, though plans were later axed by the capital's mayor for offering "very limited public benefit".

Images are courtesy of Foster + Partners.