The Euclid Residence renovation was designed to modernise the early 20th-century property while keeping elements that allude to its history, and also provide ample space for entertaining guests.

"The client's brief was to create a bright and fresh contemporary environment," Maxime Bocken, studio director at Ancerl Studio, told Dezeen. "It had to be modern yet warm and inviting featuring storytelling design detail."

"To do so, we looked at the original early 20th-century floor plate and really asked ourselves what was worth preserving and what needed to be evolved."

The firm restored the brickwork facade of the house to keep it in line with the aesthetic of its surroundings on Euclid Street, located in the Canadian city's Little Italy neighbourhood.

"Euclid is such a quaint and lovely residential street in Toronto that we absolutely wanted to preserve its romantic streetscape," Bocken said.

The main intervention was to open up the floor plan by stripping out a number of partition walls inside the four-storey property.

Existing brickwork walls that were preserved were painted white, giving a modern and fresh touch to the past.

"Brick is such a wonderfully emotive texture; we loved to bring it back to life on the facade but also expose it on the ground floor," Bocken said. "Only this time, we painted it white to keep the inside environment visually quiet and calm."

Other rendered walls are painted white, and the floors are covered by wide white oak planks to create a neutral backdrop. 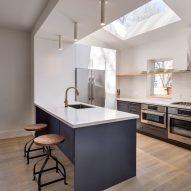 StudioAC opens up interior of century-old Hilton House in Toronto

This is then accented by weathered wooden beams that were also preserved during the renovation and black steel elements – including industrial-style window frames and ornamental fireplaces.

The kitchen and dining room are located in a double-height space in the middle of the ground floor.

This main level is completely open-plan and has a living room at the front and a family room at the rear, which has glass doors that open onto a deck and back garden.

Ancerl Studio chose hues of "off-whites and beiges" for most of the accents and furnishings. Details include the white stone kitchen countertop and the tones of the sofas and seats in the lounge spaces.

The first floor of the property is arranged to wrap in a U-shape to wrap around the kitchen and dining floor below.

It is dedicated to the master bedroom suite, including a bathroom with concrete vanities, a white bathtub, a walk-in rain shower and a balcony.

Four more bedrooms, three bathrooms and a recreation room are located on the third floor and lowest level.

Photography is by Maxime Bocken.