Shuttered windows offer glimpses into a bright white living room, hidden behind the greyed walls of this house in Toronto that was renovated and extended by local studio Post Architecture.

Post Architecture's transformation of the residence in the Etobicoke suburb involved adding a gabled volume to the front, and extending the rear to include a first-floor level.

The overhaul resulted in two distinct volumes from the outside. Both comprise a grey brickwork base and a wood-clad top, to blend in with the style of surrounding residences.

The firm named it Peak-a-Boo, after the "unexpected" elements disguised behind this traditional exterior, as well as the pointed shape of the living room.

"This project owes its name to the playfulness of the interior spaces, the unexpected height (peak) upon entering, and the spatial relationships that constantly reveal new sight lines," said Post Architecture in a project statement. 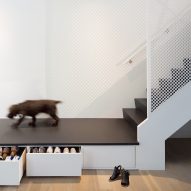 The house was renovated and extended for a couple who wanted extra space to host visiting family. As part of the reconfiguration, the firm was able to create three bedrooms and bathroom on the first level, and an open-plan living area.

Two bedrooms, including the master, are located at the rear of the first floor, with windows offering views of the back garden.

The third bedroom and the bathroom are positioned at the front, and have shuttered openings that overlook the living area on the floor below.

"They even allow for a peek not only to the the open concept living spaces below, but also to the surrounding streetscape and backyard beyond," said the firm. "When left open, the 700-square-foot (65-square-metre) upper level feels much larger."

Bright white-painted walls and wooden flooring run throughout the interiors, to create continuity between the different spaces. In the feature living area, this is made even more dramatic with the pointed ceiling and beams also painted white.

A number of black details provide a contrast to the pale surfaces, including the exposed beam that runs along the base of the floor plate and a long pendant light that hangs from the roof.

The hearth is also stained black, which offsets the white cabinetry above, and extends to form the first step of the wooden staircase.

"Each material and element has been selected to play off the other's strength in modest and simple ways," said the firm. "Their combined effect, holistically, offers a warm and comforting home fit for the lifestyle of its inhabitants."

The lounge forms part of the open-plan living area, with the kitchen and dining room set in the single-storey space at the rear.

Colour blocking continues here with black and white cabinetry, which Post Architecture rearranged to run along the side walls. This allowed for a glazed back wall to offer views to the garden.

Post Architecture employed similar monochrome hues at another overhauled Toronto house, while its other projects in the city include adding a protruding window box to a century-old brick house as part of a major renovation.

Photography is by Revelateur Studio. 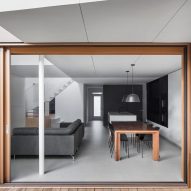