Mexican designer José Bermúdez has created an incense tray to reference the form of active volcano Mount Fuji in Japan.

The Fuji incense diffuser comprises a foundry brass plate that fits inside a small concrete container.

"Inspired by Mount Fuji located in Japan, the concept was to create an elegant piece and a start conversation object," José Bermúdez said. "Fuji means wealth or abundant, the same words to express what the incense are meant to attract in our lives."

A hole punctures the centre of the round brass plate and large enough for the insertion of one stick. Bermúdez said that when it is lit, the billowing smoke alludes to to an erupting volcano.

"Fuji holds the sticks in vertical position to create the main focal view and a full reference to the volcanoes when they erupt," the designer continued. 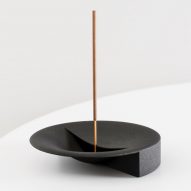 The brass plates are available in two finishes – aged brass and natural – which are intended to weather over time and with use.

As the wood burns the ash remnants are collected on the tray. The dish can also be then be removed from the top of the container so that both objects can be cleaned.

Más, a Mexico City concrete company, produced the cylindrical base for the object, which comes in either a black or pale grey.

"Fuji is a balance between two hard materials and the fine delicacy of the incense sticks," Bermúdez added.

Bermúdez works in Mexico City and Colombia. In 2017 he teamed with Colombian designers Vrokka and Fango Studio to create a series of coffee-related objects, including utensils, cups and a storage cabinet.

Other designers that have created incense-related products, include Canadian Lukas Peet who used 3 D printing technology to craft a geometric ashtray and design studio Yield, which developed a collection of candles and incense sticks based on famous architects such as Frank Lloyd Wright, Carlo Scarpa and John Entenza.