Natural latex is combined with rice hulls and a woodsy blend of essential oils to form this scented jacket, created by Alexander McQueen sub-brand MCQ to showcase the unique characteristics of plant-based leather alternatives.

Produced in a limited edition of ten as part of the label's Grow Up collection, the outerwear piece takes the form of a traditional biker jacket but is made from a vegan animal-hide substitute called Mirum.

The material was developed by American start-up Natural Fiber Welding (NFW) and customised for MCQ with an off-white base colour that was created using mineral clay and allows the rice-husk speckles in the plant leather to shine through.

The brand also added an earthy aroma using different essential oils, which will linger in the garments for around a year. Designed as a homage to gardening, each of the final jackets is hand-painted with childlike nature motifs by New York artist Kevin Emerson.

"Imagine putting this jacket on and it's not just a jacket," NFW vice president Oihana Elizalde told Dezeen. "There's this scent that adds a different dimension, which MCQ really loved."

"That's something we are starting to explore more and more, particularly in the fashion space."

Unlike other plant-based leather alternatives, which often rely on a layer of plastic for their durability, Elizalde says NFW's material has been independently certified as petroleum-free and entirely biobased.

Its natural fragrance is directly mixed in with the other ingredients, namely the clay, FSC-certified latex derived from the rubber tree and a number of different vegetable oils.

This is then combined with a filler, for which NFW uses waste materials from the food industry such as coconut and corn husks or, in this case, rice hulls.

After being applied to a backing textile made from organic cotton, the finished material would normally be embossed with a leather-like texture.

But MCQ opted to leave its version completely smooth and supple to keep the focus on the rice-husk speckles.

"They didn't want something that looked like leather," Elizalde said. "It didn't need to have the typical animal grain. They loved this idea of showing off natural materials and this additional granularity that you get by seeing the rice hulls."

The resulting plant leather has a carbon footprint of around two kilograms of CO2 per kilogram of material, Elizalde estimates, based on a preliminary lifecycle analysis.

"It depends on the backer you use and if the backer is dyed," she said. "But the material emits up to 40 times less carbon than leather and up to 17 times less than synthetics."

As a collaborative brand under the English fashion house Alexander McQueen, MCQ brings together a different team of creatives for each of its collections.

In this case, the material is supplied by NFW before being fashioned into leather jackets courtesy of the MCQ team and further personalised by Emerson with a mixture of different paints and markers. 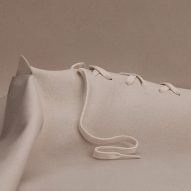 When it has outlived its usefulness, the plant leather can be ground up and recycled into new Mirum or placed in soil and left to biodegrade.

Due to the natural durability of latex, this will take more than just a couple of months. But Elizalde says the material was carefully engineered to avoid polluting the surrounding environment during its slow degradation process.

"We designed a material with zero synthetics and zero plastics so that when you put it back to earth you don't have the issue of microplastics," she said.

"We also don't use dye or chemicals to alter the material because those chemicals over time will leech out and end up in the water."

However, in the case of the jackets, these efforts are subverted by adding the different paints and marker inks, which generally contain some form of fossil-based resin or solvent.

Mirum has already been turned into a number of small accessories such as bags and wallets, while companies from Allbirds to Ralph Lauren have invested in the material in the hopes of integrating it into their products.

The MCQ collaboration marks the first time the material has been fashioned into garments, which will be gifted to "big name VIPs and friends of the brand".

A number of major fashion labels have launched products made from plant-based leather alternatives in the last year, although, like the jackets, most have so far been relegated to limited editions and concept pieces.

Among them are various products made from mushroom mycelium, including a two-piece ensemble Stella McCartney and updated versions of the Adidas Stan Smith trainers and Hermès's Victoria shopper.