Designers from Mexico and Colombia have collaborated on a set of objects, created to facilitate coffee-drinking customs from the two countries.

Mexican designer José Bermúdez, and Colombian designers Vrokka and Fango Studio worked together on the Samaná project – named after a coffee-harvesting region between the cities of Bogotá and Medellin.

The team designed a range of products, intended to unify coffee cultures around Central and South America. Pieces include a cabinet that doubles as a table, as well as mugs, spoons, and vessels.

The cabinet-table, which the team described as a "container", comprises a solid ash box with curved edges sat atop a slender metal frame.

The top opens up so coffee-making utensils can be stored inside, and forms a preparation surface and a place for sipping when closed.

"The container is inspired by the shape of the wooden boxes used by coffee growers when selecting the best coffee beans," said Bermúdez. "The height of the container is because of how Mexican cantinas are used. People use cantinas as a meeting point to discuss while they prepare some drinks."

"We used the same concept, but on how to make a coffee conversation," Bermúdez said.

The interior of cantinas often have a mixture of a bar stools and cafe seats. The container evokes this countertop design, and has a similar height for standing at.

The wooden box also features leather on the inside to protect coffee accessories, with a thin piece of dark steel covering the top.

"The leather is used to have a more warm surface to keep all your accessories inside the container safe," said Bermúdez. "The top part is made by thin steel to have a more rough surface to prepare all the ritual coffee."

The Samaná collection also includes homeware pieces for preparing and drinking coffee. Small wooden sticks are attached to individual little bowls, also made from wood, to form spoons that can be used for measuring grounds and stirring coffee.

Coffee cups are made of ceramics and coloured in a rustic cream colour. A pour-over maker comes with a filter holder made of oak, instead of more commonly used glass or ceramic.

Other pieces in the collection include more ceramic vessels with fitted tops, and small wooden plates.

Designers from around the world have created products to help fuel out caffeine addictions in style. British artist Hugh Miller designed a similar a wooden table with underneath storage made for making and sipping coffee, after observing Japanese coffee-making rituals while travelling.

Other coffee makers made of unconventional materials include copper-covered pieces for brewing and serving by British designer Tom Dixon, and wire dripper and carafe also made from metal by Toast Living. 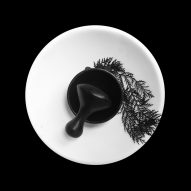