Iterare Arquitectos has used traditional construction techniques and local materials to update a 100-year-old home in Valencia with a minimalist interior.

House of Giants is located in Valencia's El Cabañal neighbourhood, which was historically populated by fishermen.

The three-storey home, which belongs to a local artist and engraver, has been designed by Iterare Arquitectos to blend in with its historical surrounds.

Its reworked interior is now decked out with materials that are typically found in buildings in the local area – this includes limestone sourced from a local quarry and timber reclaimed from the home itself.

Limestone in particular features heavily throughout and has been used to clad the staircase, floors, bathrooms and the first-floor terrace.

According to the practice, construction techniques used throughout the project are typical of the Mediterranean basin, but have been reinterpreted to create a minimalist, clean-lined look.

"The heritage of the construction and the neighbourhood held a really heavy weight, so we felt leaving materials from the past would create a unique dialogue with the new construction," said Rubén Gutiérrez Rodríguez, director of the practice.

"In the end, we believe listening to the building and good practices of the past is not against contemporary thinking; we should be able to keep a conversation with the past without renouncing our contemporary language and new sensibility."

On the ground floor lies an open-plan dining and living area. The kitchen, which runs along a side wall, continues through a glass partition to a small outdoor patio where it is sheltered from the rain by a terrace on the first floor.

As well as providing shelter below, the terrace provides a spot for the owners to enjoy a drink while overlooking the garden.

Original features at this level include the restored vaulted ceilings on the ground floor, uncovered areas of raw plaster, and original tiles which have been carefully cleaned and polished.

Reclaimed wood from the house's original roof has also been repurposed as ceiling beams for the first-floor living area and cut to create a slatted privacy screen on the house's facade.

Plaster details on the first and second floors were restored, tiles and joints were cleaned and the first floor balconies were completely rebuilt in stone.

A flight of stairs has been positioned at the entrance of the house so that the owner's clients can visit his studio and showroom, which is on the top floor, without intruding on the private living spaces.

Intended to have "Swiss watch precision", the staircase was designed using BIM – a 3D model-based software. It comprises different-sized limestone slabs that range from two to 10 centimetres in thickness, linked together by concealed steel reinforcements.

Each of the slabs was produced and installed by a highly experienced stonemason, who was able to navigate the home's uneven walls.

"Traveling [up the staircase] becomes a sensual experience," explained Rodríguez. "It's like walking through a cave completely covered with natural stone, rich in reflections, light and shadows over the walls and steps."

"The limestone has a cream tone and, although it has the specks you can expect from natural stone, it also has a silky soft nature to it," he continued.

Slabs of stone that the owner has engraved to feature towering human figures are inlaid in the front facade – a feature that lends the house its name.

Giant-like forms have also been created on the frosted-glass front window.

"The building is listed and its facade is protected by local regulations, which don't care about or understand the importance of the much-needed mix between old and new," said Rodríguez.

"We had to find some workarounds to the regulations in order to change it."

"The stone used on the facade is also a different limestone than the interiors, and is left unpolished," he added.

"Its more porous by nature, which gives it very characteristic aging. All the facade will get old in a beautiful way." 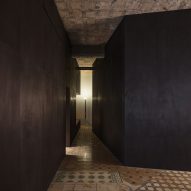 Lines of one, three and five holes have also been punctuated in the front door to serve as a "code" for the house number, which is 135, and create a play of light in the entrance hall.

A number of other design studios have attempted to reconcile old and new elements in Valencian homes.