Tomb Raider and Worms are among nine classic video games celebrated in the latest stamp collection by the British postal service Royal Mail.

The set of 12 stamps charts the evolution of British games design and technology – from the pixelated images of the open-world space shooter Elite in the early 1980s to Tomb Raider in the late 1990s.

Each game has a dedicated stamp, while Lara Croft as perhaps the most well-known name on the list is honoured with a dedicated miniature-sheet of four stamps exploring her changing design throughout the years.

The shortlist of games was curated to represent major milestones in the gaming industry, and includes the first civilisation-building game Populous, FIFA predecessor Sensible Soccer and the puzzle-platformer Lemmings.

The games were selected from a long list of options by Royal Mail in collaboration with the Association for UK Interactive Entertainment (Ukie) and independent video game experts.

The stamps themselves were designed by Bath-based Supple Studio and retro gaming book publisher Bitmap, with each based on freeze frames from the actual gameplay.

"The aim was to capture an iconic screenshot that sums up the game and will bring back memories for people who played them many years ago," creative director of Bitmap Books Sam Dyer told Dezeen.

The Sensible Soccer graphic, for example, shows the goalie frozen in time at full stretch, in the climactic moment before he concedes a goal.

"Stamp design is trickier than you might think," added Supple Studio's Jamie Ellul. "Quite often what looks good zoomed in on screen, looks wrong when printed out at stamp size.

"This meant that for each game, we took literally hundreds of individual screenshots, and then it was a case of trial and error to see which image would work at scale."

The Lemmings stamp with its tiered pillars is a particularly good example of this according to Ellul, as it encapsulates the gameplay while still maintaining a graphic, uncluttered layout.

From there, the designers manipulated the graphic to accommodate the essential elements of the stamp, such as the Queen's head and the value.

Each one is also emblazoned with the name of the game, although the designers shied away from simply using their logos.

"We worked with a guy who could extract the actually typeface from the game's files and this is what was used in the design," Ellul explained.

In this way, they were able to trace how not just the gameplay but also the typography evolved with the technology available, from clunky and pixelated to clean and smooth.

With the stamps collection, Dyer believes these seminal British games are finally getting the recognition they deserve.

"Without these early games, there wouldn't be the billion pound British games industry as we know it today," he explained. "They were not following a trend or style – they were true examples of technical innovation." 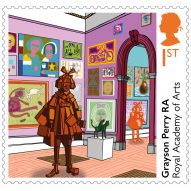 "Back then, you had some serious restrictions to work with in terms of game file size, limited colours and numbers of sprites on screen at once," he continued.

"The programmers had to be creative and work around the problems and what they ended up with were real masterpieces that were game-changers in the industry."

In previous years, Royal Mail has released limited edition stamp collections to celebrate the 250th anniversary of the Royal Academy of Arts – with designs by Grayson Perry and Tracy Emin among others – as well as celebrating the UK's "renaissance of contemporary architecture".