A drag queen, a lesbian couple kissing and a child waving the rainbow flag are among the figures depicted in artist Sofie Birkin's stamps for the Royal Mail, which are designed to commemorate the 50th anniversary of the first official Pride march in the UK.

Queer artist Birkin created the set of eight colourful stamps illustrated with figures marching for Pride for the Royal Mail – the British postal service. To create the illustrations, Birkin drew on real found photographs of people at Pride parades throughout history.

"I started hunting down as many images as I could from British pride parades over the years, so we could develop characters, visuals and placards that were period appropriate," Birkin told Dezeen.

"I was designing onto the stamp template from the beginning, at first just shuffling around black and white sketches and then progressing through to the final colour illustrations once we'd locked down the characters and composition."

Through vibrant block colours and animated characters, the set of stamps celebrates "the story of Pride", with images that reference early Pride marches in the 1970s as well as contemporary marches from recent years.

"Beginning in 1972, the stamps tell a story of Pride over time," said the Royal Mail.

"They depict the first 'Gay Pride rally', to the more recent update on the traditional rainbow flag, its design encompassing the flags of trans and intersex people, while also referencing the inclusion of LGBTQ+ people of colour.

One stamp in the special collection depicts a flag that says "love always wins" while another has the phrase "glad to be gay". A third stamp shows two women carrying a banner that says "lesbians unite!".

"I always work with bright colours but unsurprisingly we wanted to go with a rainbow colour palette for this one," Birkin explained.

"I wanted to go with a slightly more retro rainbow – the red is orange-hued, the yellow is mustardy and there's a dusky lilac in there as a nod to all the 70s and 80s characters." 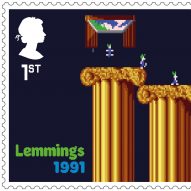 The first Pride march in the UK, which was organised by the Gay Liberation Front, took place in London on 1 July 1972 and saw protesters march from Trafalgar Square to Hyde Park.

The march was inspired by similar events in support of the LGBTQ+ community in the US, after the Stonewall riots in New York – a series of uprisings that began in response to a police raid of the queer-friendly Stonewall Inn.

The stamps are available to purchase from the Royal Mail's website.

Past sets include a series of stamps featuring six of British singer David Bowie's most iconic album covers and bespoke stamps to celebrate 250 years since the Royal Academy was founded.