David Kohn Architects has worked with Nord Studio to convert a listed residential interior in Berlin into a grand office for property developer Euroboden.

The offices occupy the principal floor of the Palais Eger – an imposing Belle Époque courtyard block built in 1881 on Tempelhofer Ufer in the city's Kreuzberg neighbourhood.

Laid out across a series of eight grand domestic rooms, the interiors boast high-ceilings, ornate wood panels and decorative plasterwork.

Each of the listed rooms has its own unique features and distinctive character.

For instance, the main salon has marquetry floors, natural timber wainscoting and pilasters that rise to meet a gilded and coved frieze that frames an elaborate timber ceiling.

A hallway leading to the salon similarly has elaborate painted timber wainscoting, frieze and ceiling.

"The rich variety of interiors, along with a distinctive tapering plan, is reminiscent of Sir John Soane's house museum in London which became a source of inspiration," said David Kohn Architects.

"At Tempelhofer Ufer, the design team have sought to echo Soane's blurring of lines between living and working space to create an air of productive domesticity and a clear departure from typical commercial interiors."

The rooms' important historic features have been carefully restored and sit in contrast to the architects' bold and contemporary additions.

These include two-tone paint schemes that recall the original wainscoting as do the rooms that are partly clad in marmoreal – a nougat-like engineered marble designed by Max Lamb for Dzek.

In each room, carefully-sourced contemporary furniture is arranged in the same way it would be in a formal nineteenth-century interior.

As well as office space, Euroboden needed its HQ to provide flexible spaces for hosting a wide variety of events.

"Euroboden was therefore looking for both an office and a venue to further develop its cultural initiatives."

When Palais Eger was originally built, it was created as a villa for a wealthy timber merchant. 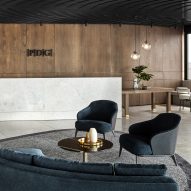 Its grand rooms were used for hosting the merchant's customers, combining living with business.

Echoing its past as a mixed-use space, the reconfigured interior provides spaces for day-to-day desk-based work and meetings as well as public events and displays.

The furniture selected by London-based David Kohn Architects and Berlin-based Nord Studio allows for a degree of flexibility within each of the spaces.

In the long term, as the company grows and its needs change, the interiors can be easily rearranged accordingly.

"The central listed salon, for instance, acts as an informal meeting space and lounge during the day, and can be reconfigured for exhibitions or evening lectures that spill into the spaces beyond," explained the architects.

"Again the design team found historic precedents for this blend of public and private space in the merchant's home and Soane's architecture."

The Euroboden offices are not the first project that the two practices have collaborated on.

In 2018, David Kohn Architects and Nord Studio won a competition to design a residential block in Berlin with a zigzag profiled facade.