Aoa Architects has clad the stepped gables of a playful apartment block in South Korea with glossy red and white tiles in a reference to the video game Minecraft.

The building, called Cascade House on account of its symmetrical stepped form, is located in Seoul's Mangwon-dong area.

Along with Minecraft, Aoa Architects also cited colourful Lego bricks and the stepped gables of traditional Belgian houses as inspiration for the form and facade.

Cascade house has apartments for five families placed atop a ground-floor shop.

The design was also chosen as a counterpoint to the area's more bland, regulations-driven architecture.

"Most family houses in the neighbourhood are the result of the auto-generative form [caused] by building regulations, such as solar setback requirements and the economic inevitability to accommodate as many units as possible," explained the practice.

Instead, the unusually-shaped block conceals five apartments, arranged in a symmetrically.

The block's line of symmetry cuts through a central staircase, which has been finished in exposed concrete and thin steel balustrades.

Access to this stair is via an open undercroft supported by concrete pillars which sits alongside the shop unit, providing parking space and also a semi-private area next to the street.

This undercroft gives a lightness to the bold stepped gables above.

Cascade House's corners are accented by contrasting rough stone panels that also mark the top of each window.

"The design was settled with partial decorations that could be easily done without causing trouble for the contractors," project architect Uk Sunwoo told Dezeen.

Four single-bedroom apartments occupy each half of the first and second floors as they step upwards. 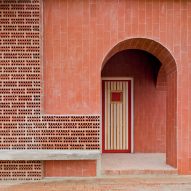 A larger, two-bedroom apartment occupies the third floor, which opens onto two terraces and features an attic space above.

The symmetrical layout continues in the individual apartments.

A central stair opens into the living room, where a marble pillar sits at the centre of two sliding wooden doors leading to the kitchen or bedroom, separated by a glass-brick partition.

"Split around the marble pillar in the living room, the spatial juxtaposition of the kitchen and the bedroom becomes somewhat surrealistic, like a drama set," said the practice.

The pixel-like red tiles that cover the exterior have been used to create bright splashbacks in the kitchens.

Aoa Architects was founded by Jaewon Suh and Euihaing Lee in 2013.

Another original take on South Korea's building regulations was created by practice STMPJ, which designed a skinny red house in Seoul.

Architect Bjarke Ingels is also a fan of Minecraft, and has said he thinks architects should adopt the videogame's world building principles. The United Nations have used the game to get communities in developing countries to design their own public spaces.

Photography is by Hyosook Chin.