The work of six up-and-coming French designers is on show at the Maison&Objet furniture fair in Paris, revealing an emerging trend for handmade rather than mass-produced objects.

Among the exhibits are various experiments with craft processes in ceramics, furniture and electronics.

According to the judges, who included prolific designers Pierre Charpin and Pierre Yovanovitch, the showcase reveals that industrial design is falling out of favour in France. 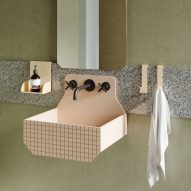 Marcante Testa brings colour and geometry to the bathroom for Ex.t

"There are currently two main trends in the young French design scene," said Ecole Camondo director René-Jacques Mayer, who was also on the judging panel.

"The first is that designers are developing stronger links with craftsmanship. They are distinguishing themselves less with industrial products than with objects produced in limited quantities using traditional savoir-faire."

More than just a chair

"Secondly, they are no longer interested in simply designing a chair, but develop projects that are much more societal," Mayer added. "Their overriding aim is to solve problems and come up with new uses."

Rising Talents is a regular fixture at Maison&Objet, always with a focus on one country. Organisers chose France for the January 2020 edition, to coincide with the biannual fair's 25th anniversary.

The exhibition opened on 17 January and continues until 21 January.

Here's a look at all six designers and studios featured:

Paris-based duo Natacha Poutoux and Sacha Hourcade try to bring a softer aesthetic to domestic products that are not typically seen as design objects, like a kettle or the cable of a light fitting.

Their designs include an air humidifier that looks more like a glass vase, a ceramic data server designed to be on display and a radiator made up of suspended columns.

"We want to bring design to fields where it's not necessarily expected today," said Poutoux.

Unusual forms and bold colours characterise the work of Laureline Galliot, who trained as both a dancer and a colourist before moving into design.

Either drawing with her fingers on an iPad or working with virtual reality devices, Galliot develops designs for objects that are completely unique, from patterned rugs to ceramics.

"My works reflects my exploration of merging color with structure, integrating it into design instead of layering it over the top at the end," she explained.

Mathieu Peyroulet Ghilini plays with different geometries in his designs. Projects include a hanging partition made of rope and ceramics, called Mur de Sèvres, and the Elephant Mirror he produced for Galerie Kreo.

"I'm a designer, but I do a lot of paintings," he told Dezeen. "They feed one another."

Materials are the central focus of Wendy Andreu's work. Objects she is presenting at Rising Talents include a rough-textured bookshelf, a stool comprising eight steel tubes, and seats made out of cotton rope and silicone.

"At the end of the day, what I do is for human beings with senses, who want to see something, feel something, touch something," she said. "My work expresses a sort of reality and humanity."

The most established of the Rising Ralents, Paris-based designer Julie Richoz has created designs for brands including Tectona, Alessi, Louis Poulsen and Louis Vuitton.

She typically works with a single material at a time, whether that's coloured glass or a textile. Examples include her Oreilles vases and the raffia Binaire rug she designed for Manufacture de Cogolin.

"I like the idea of repetition, but with subtile variations," she said.

Studio Adret founder Adrien Garcia divides his time between Paris and a 17th-century castle near Nantes. This grand setting inspires his designs, which are typically also grand in scale and ambition.

"I need its empty, rundown spaces in order to imagine new creations," he said.

Garcia is working on his first furniture collection, which will reference the work of land artists like Andy Goldsworthy. At Maison&Objet, he presented a modular furniture system contained within a huge pink cuboid.