Auction house Sotheby's has partnered with streetwear publication Highsnobiety to create a line of t-shirts, jumpers and hoodies emblazoned with artworks dating as far back as the 16th century.

Each of the minimalist pieces is rendered in simple black or white, and features one of four paintings that are for sale as part of Sotheby's Masters Week Auctions.

Among the pieces up for auction is a portrait of a sea nymph by Italian Baroque painter Ginevra Cantofoli and a duo of 18th-century Dutch artworks showing Bacchus and Ceres, the Roman deities of wine and agriculture.

The images are overlaid with colourful typography, which ranges from bright orange to azure blue and proclaims details about the featured painting such as the name, and the period it originates from.

"We worked with Highsnobiety to choose paintings we both felt had a timeless graphic quality that would lend itself to contemporary design," Brahm Wachter, Sotheby's Director of eCommerce Development, told Dezeen.

"We carefully curated the selection to include works that we thought were visually arresting and could speak to a broader audience that might not be familiar with Old Master works."

The artworks were chosen to represent the more accessible side of Sotheby's Master Paintings Sale. 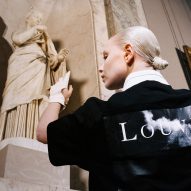 In this way, the clothing line is meant to serve as a gateway into the art world for streetwear-enthusiasts who have an existing penchant for accumulating rare designs.

"We know that the Highsnobiety reader appreciates art, but they may not be in a position yet to purchase it," explained the publication's CEO and founder David Fischer.

"This audience is used to collecting limited-edition products. That may be a sneaker, a design work or a piece of furniture today but fine art is the clear next step."

Beyond Highsnobiety's online shop, the collection will also be sold in in the company's pop-up in London department store Selfridges.

From 20 January, this is set to feature a selection of products that bridge the worlds of fashion, art, technology and design.

Elsewhere, Off-White's Virgil Abloh has recently collaborated with the Musée du Louvre for a streetwear collection that combines the brand's hallmark typography and arrow logo with paintings by Leonardo da Vinci.