The collection produced by Off-White c/o Virgil Abloh was created to mark the 500th anniversary of Leonardo da Vinci's death.

Abloh, who is the artistic director of Louis Vuitton's menswear collection, as well as an artist, DJ and entrepreneur, developed the clothing items for the ready-to-wear streetwear brand he founded in 2012.

The capsule collection combines Off-White's signature markings, including its graphic branding and four-way arrows, with some of da Vinci's most famous paintings.

"I was fascinated with da Vinci early on," said Abloh, who recalled encountering the artist's work during his senior year of high school in Wisconsin.

"I was super interested not only by his artworks but also by the influence he had in many disciplines besides art: science, engineering, architecture... To me, he symbolises everything the Renaissance was."

One of the hoodies is printed with a panel depicting the Virgin of the Rocks, while the painting known as Saint Anne is transferred onto the cross motif on the back of one of the tee-shirts.

Other garments feature monochrome representations of da Vinci's anatomical sketches, with the gallery's own logo also displayed prominently alongside the Off-White branding.

"I want to crash together these two worlds that are seemingly different: fashion and high art," claimed Abloh, whose varied output in 2019 has included a collaboration with IKEA and a vision for a home of the future. 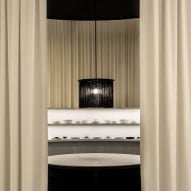 "It's a crucial part of my overall body of work to prove that any place, no matter how exclusive it seems, is accessible to everyone," he continued, adding that creativity need not be limited to one discipline.

"I think that Leonardo da Vinci was maybe the first artist to live by that principle, and I am trying to as well," Abloh claimed.

Promotional photography for the capsule collection was shot inside the Louvre's Grande Galerie to emphasise the connection between the contemporary fashion designs and the artworks that inspired them.

The Louvre holds the largest collection of da Vinci's paintings and its director of external relations, Adel Ziane, claimed that the collaboration with Abloh is "a way for us to reach a new audience, a new manner to interest them in the Louvre".

The collection coincides with an exhibition dedicated to the artist that is on show at the Louvre until 24 February 2020.

It is available from the Louvre's gift shop and web store, as well as through selected outlets and online retailers. Prices range from $335 to $640.

Other recent examples of fashion designers working on projects away from the catwalk include Rei Kawakubo's costume designs for the Vienna State Opera, and a homeware collection by Belgian fashion designer Ann Demeulemeester.