Zaha Hadid Architects has released a video revealing a sinuous white exhibition centre that it is close to completing on Unicorn Island in Chengdu, China.

Start-Up exhibition and conference centre will be the first building to reach completion in the Unicorn Island masterplan, which Zaha Hadid Architects is developing for the Chengdu government on the eastern shore of Xin Long Lake.

The island is being developed to support the growth of China's technology and research sectors by catering for unicorns companies – start-ups with a value of at least $1 billion (£767 million).

"With China's economy evolving from traditional industries to internet and technology-based organisations, the country is now home to a third of the world's technology start-ups valued at over a billion US dollars – termed 'unicorn companies," explained the studio.

"A mixed-use masterplan for 70,000 researchers, office staff, residents and visitors, Unicorn Island has been designed to enhance the wellbeing of its community."

Plans for the 67-hectare Unicorn Island scheme were first revealed in 2018 when OMA shared its entry to a competition for the masterplan held by the Chengdu government. Zaha Hadid Architects has now been revealed as the studio behind the scheme.

The masterplan forms part of a wider drive to move China's economy away from manufacturing, towards knowledge and services.

While little information has been disclosed about the near-complete Start-Up exhibition and conference centre, the video reveals that it will be distinguished by Zaha Hadid Architects' signature sinuous style.

When the masterplan reaches completion, it will form part of a series of visually similar buildings arranged in "clusters" around a central plaza and metro station. 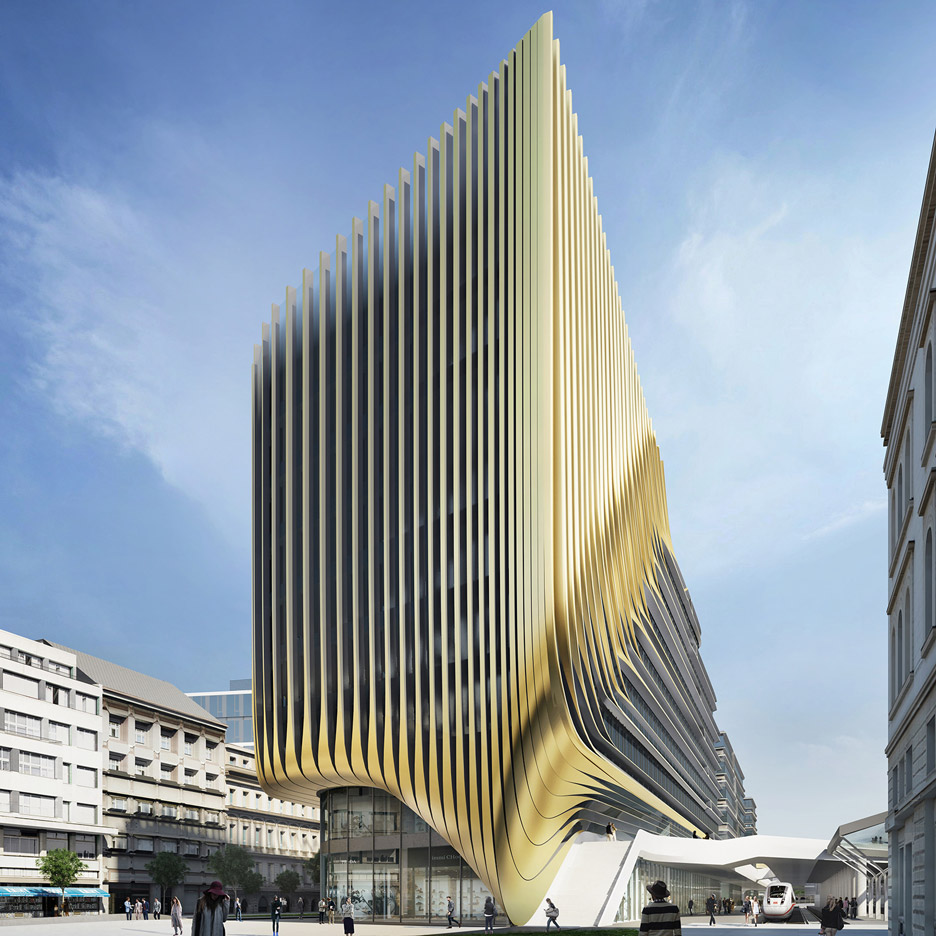 According to Zaha Hadid Architects, the "composition of each cluster will be established organically" over the lifetime of the scheme in response to changing needs.

However, what is certain is that each cluster of buildings will be located a few minutes walk or cycle ride to the plaza and station, to ensure the entire island is easily accessible.

Weaving in between the building clusters, the masterplan will contain green civic spaces, water-conservation areas and urban farming to provide residents, workers and visitors with fresh, locally-grown produce.

Developed in collaboration with Ramboll, Zaha Hadid Architects hopes this will nod to the ancient Dujiangyan irrigation system – a UNESCO world heritage site and irrigation and flood control project in China.

Zaha Hadid Architects was founded in 1980 by the late architect Zaha Hadid. Today it is headed by Patrik Schumacher, who recently spoke at our Dezeen Day conference.

Elsewhere in China, the studio has recently completed a giant starfish-shaped airport and the 45-storey Leeza Soho skyscraper containing the world's tallest atrium.

Visuals are by MIR unless stated.