Dezeen promotion: Architects have the power to make the world more like their ideal dream, Bjarke Ingels told Sky-Frame in an exclusive interview.

Speaking to Swiss window brand Sky-Frame from his home – a 450-tonne car ferry moored in the Port of Copenhagen – Ingels, who is the founder of BIG, explained the power of architecture.

According to Ingels this means that architects have the power to shape the world for the better.

"Pragmatic utopianism where you say utopia is that kind of literary concept of a world so perfect that it couldn’t exist anywhere and pragmatism is the idea of looking at the practicalities of reality and dealing with it," he said.

"When you combine the two things it sounds like an oxymoron, but actually what it is reminding you that every time you are making an architectural project, intervening somewhere, you have a chance to make this fragment of the world more like your ideal world."

One project where Ingels has redesigned a building type for the better is the CopenHill Power plant in Copenhagen harbour.

"99.9 percent of the particles that are released when they turn the waste into energy are somehow filtered or scrubbed – there are no toxins coming out of the chimney," he continued.

Another area that architect always aim to achieve in their work is to be connected to the outdoors.

"In my point of view the connection between the inside and the outside is this impossible dream that architects always strive towards," said Ingels.

"You have so many different challenges that require you to compartmentalise the inside from the outside and at the same time, because we are biological human beings, we long for that relationship. So the more we can undo this distinction, the better."

"In an architect's ideal world, the indoors and outdoors are separated by as little material as possible," continued Ingels. "We want the best and clearest glass with the lowest possible iron content. Zero colouration. We want as little structure, as few frames, as possible."

According to Ingels this is true at his houseboat, which has many large windows created by Sky-Frame that have views across the surrounding harbour.

"The windows on our ferry are so transparent that you feel as though you can float right through them," he said.

"We were looking for sliding windows with the most minimal structure possible. The fixed and the opening parts had to be indistinguishable," he continued.

"It's really to the point where sometimes, when the windows are open, you actually can't see which one of them is the open one." 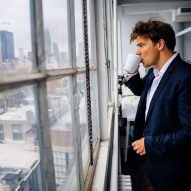 Bjarke Ingels says a style is "like a straitjacket"

While meeting humans' evolutionary need to be connected to the outside, Ingels says framing the outside in this way is important to gain perspective.

"Certainly, this does not help us to keep a clear head. But it puts us in touch with the major challenges we face," he explained.

"This way of zooming out, called reframing in psychology and sociology, gives us a view of the bigger picture, the overarching framework. Rather than understanding a single building, we want to understand the neighbourhood and the ecosystem in which it exists," he concluded.

"Architecture is the art of accommodating human life. At the end of the day, all that we do is in order to enable the life that's gonna happen there."

Sky-Frame is a Swiss brand known for its sliding window systems founded in 1993, with many products now seen in several thousand properties across all continents.

Find out more about Sky-Frame products on its website.