Demolition has started again on Paul Rudolph's Shoreline Apartments in Buffalo, New York after it was halted two years ago when a resident refused to move off the premises.

The demolition of the 1970s brutalist housing complex began on 23 January, after work was stopped in January 2018.

Locals took to social media to voice their concern and publish live footage of the destruction, including Buffalo photographer John Hickey, who posted a series on his Twitter account.

Demolition of the Shoreline Apartments gets underway in Buffalo, Thursday, Jan. 23, 2020. pic.twitter.com/SMdC9iSAvq

Rudolph's development is expected to be completely torn down by May, according to local news station WFBO, and a new 18-building complex with 166 units of housing will be built in its place.

The demolition of the Shoreline Apartments is starting today, but it’s starting a little late. It was supposed to begin at 7:30 a.m., but now could start closer to 11 a.m. The construction manager said that’s tentative @SPECNewsBuffalo pic.twitter.com/ZKDcyES9bU

Shoreline Apartments are owned by Norstar Development, which partially demolished the complex in 2015, and built 48 new units in its place in 2017 on the north end – Niagara Square Apartments – with red brick construction.

The complex is in Buffalo's Columbus neighbourhood close to downtown on Niagara Street, and near the Lake Erie waterfront.

When Norstar acquired the site in 2005, a little over half of Shoreline's 426 units were occupied and most of the area was decrepit.

In January 2018 John Schmidt – the only one still living at the complex – stopped the final stage of demolition by filing a lawsuit against the destruction of the brutalist buildings with preservationist Terry Robinson.

Brutalism is a controversial architectural movement that was popular in the 1960s and 1970s, and is characterised by the use of concrete.

Shoreline Apartments join a number of buildings in the brutalist style that have been bulldozed in recent years, such as London's Robin Hood Gardens housing that was destroyed in 2017 and captured on video.

Born in Kentucky in 1918, Rudolph studied architecture at Alabama's Auburn University, formerly known as Alabama Polytechnic Institute, and at Harvard Graduate School of Design (GSD) under Walter Gropius of the Bauhaus school.

Other brutalist buildings by Rudolph include Yale University's architecture and art building, which is celebrated as one of the earliest known examples of the style architecture in America, and Hong Kong's Lippo Centre. 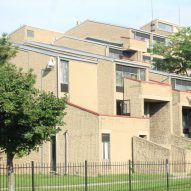 He has completed several homes in Florida – including Walker Guest House that went up for auction on Sanibel Island and Milam Residence in Ponte Vedra Beach. He is also associated with the state's post-war modernist architecture style, known as the Sarasota School of Architecture.

Rudolph has served as Yale University's architecture department chair, where he taught architects Norman Foster and Richard Rogers. He died in 1997 at the age of 78.

Photography is by David Weitzel.