Philippe previously lived in New York and purchased the remote property in Connecticut town Sharon in 2006 to serve as a weekend home. The property became his full-time residence nine years later.

He has made a number of upgrades to the barn, while still maintaining existing elements like the wooden cladding, which is stained black with Swedish pine tar, and a weathered corrugated metal roof.

The wooden walls of the log cabin have a striped appearance created from a process known as chinking. It involves sandwiching a mixture of white Portland cement, pale builder's sand, and lime in between the logs to act as a seal.

"The property was in a very neglected shape and the acreage was very overgrown," said Philippe.

Philippe's main alteration to the two-storey house was to create a space suitable for his work – which ranges from paintings and sculptures to larger interior interventions for brands like fashion house Barneys.

He created a large studio space on the ground floor by enclosing the old carport. High-level windows were added to the southern wall to create plenty of natural light and the double barn-style doors were replaced with a large sliding door.

"All of my work takes place here, it is very light and I have the luxury of space," Philippe told Dezeen.

Inside the living areas, he inserted partitions made of a mix of translucent and material panels. These new additions complement existing structural elements of the exposed wooden columns and beams.

A wood-burning stove was added to the first-floor living area, accompanying another in Philippe's bedroom. Together they form the house's main source of heating, bolstered only by electric baseboard heaters that are used to warm the house when it is vacant in cold weather.

"I find it a pleasing challenge that the weather dictates usage," Philippe added. "I like working with nature as opposed to fighting it."

The decor of the house follows a muted palette, like dark linens and leather furnishings in the bedroom. There is also an eclectic mix of ornaments that Philippe has collected over the years from his travels. 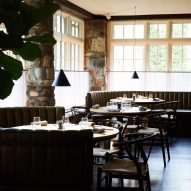 Shelving and counters made from misshapen wooden logs in the kitchen provide storage for a number of these.

The house is completed by a wooden deck, furnished with a wooden chair and a bench, that overlooks the garden at the rear.

Philippe's home and the studio is located just a short car journey from Troutbeck –  an English-style country house on the Connecticut border in New York's Hudson Valley. The property recently held an exhibition of Philippe's work as part of its cultural programming.

A number of other creatives like Philippe have chosen to settle in more remote areas such as Upstate New York, and the bordering areas of Connecticut and Massachusetts, instead of New York City,

These include two friends that met working at Fritz Hansen in New York who opened their own furniture store in the Hudson Valley and design studio Workstead, which transformed a 19th-century house in the area into a showroom for its furniture and lighting.

Photography is by Theo Coulombe.