The first images taken by the National Science Foundation's (NSF) latest solar telescope show the cell-like structures "the size of Texas" that cover the sun's surface.

The snapshots show a pattern of "turbulent boiling plasma" that covers the whole of the sun's surface.

According to the NFA, each of the cell-like structures depicted are approximately the size of Texas, and are a sign of "violent" motions that transport heat from the inside of the sun to its surface.

This process, known as convection, sees the hot solar plasma rise to form the bright centres of the cells before cooling off and sinking below the surface, creating dark "lanes".

The images have been captured using the NSF's Daniel K. Inouye Solar Telescope in Hawaii – the world's largest solar telescope.

It combines a four-meter mirror with "unparalleled viewing conditions" atop the 10,000-foot Haleakala mountain in Maui, Hawaii.

Used for the first time, the telescope captured the highest resolution images ever taken of the sun's surface. Scientists hope this will help them better understand the sun's activity, known as space weather, and its impact on the earth.

More specifically, scientists hope the newly revealed details will allow them to determine what causes the sun to release powerful flares out into space.

These are potentially harmful to air travel, satellite communications and can bring down power grids, causing long-lasting blackouts and disabling technologies such as GPS.

Having access to more detailed images of the sun's surface will help governments better prepare for future space weather events by notifying them of potential impacts as much as 48 hours ahead of time, instead of the current standard of around 48 minutes.

"NSF's Inouye Solar Telescope will be able to map the magnetic fields within the Sun's corona, where solar eruptions occur that can impact life on Earth," said France Córdova, NSF director.

"This telescope will improve our understanding of what drives space weather and ultimately help forecasters better predict solar storms," she added.

The Inouye Solar Telescope was built by NSF's National Solar Observatory and managed by the Association of Universities for Research in Astronomy (AURA).

It generates 13 kilowatts of solar power and heat from its main, four-metre mirror, and therefore requires a specialised cooling system to dispel this heat.

The dome that surrounds the telescope is covered in thin cooling plates that work to stabilise the temperature around the telescope.

According to David Boboltz, program director in NSF's division of astronomical sciences, the telescope's first images are "just the beginning".

"Over the next six months, the Inouye telescope's team of scientists, engineers and technicians will continue testing and commissioning the telescope to make it ready for use by the international solar scientific community," said Boboltz.

"The Inouye Solar Telescope will collect more information about our Sun during the first five years of its lifetime than all the solar data gathered since Galileo first pointed a telescope at the Sun in 1612," he added. 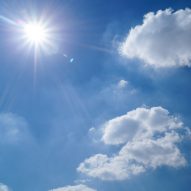 First geoengineering experiment to dim the sun on track for 2019

Scientists were also experimenting with solar geoengineering back in December 2018 in a bid to dim the sun, using a process that replicates the climate-cooling effect of volcanic eruptions.

The experiment, which was set to take place in early 2019, saw calcium carbonate particles injected high above the earth in an attempt to reflect some of the sun's rays back into space.