Due to open in late spring, Ace Hotel Kyoto is the brand's first hotel in Japan. It is housed within the former Kyoto Central Telephone Company, built by architect Tetsuro Yoshida in the 1920s.

Commune, which previously worked with Ace Hotel on its sites in Palm Springs, Los Angeles and Chicago, collaborated with Kuma to design the bespoke interiors.

"We’ve been wanting to do a project in Japan for 20 years now, and collaborating with a visionary like Kengo Kuma and longtime friends Commune make it all the more special," said Kelly Sawdon, partner and chief brand officer at Ace Hotel Group.

"Kyoto is a city that generates creativity and inspires travel, and we hope Ace will serve as a central gathering place for locals and travellers."

Kuma is currently working on the Olympic Stadium for the Tokyo 2020 Olympics.

His design for Ace, first unveiled in 2018, features a gridded facade system intended to reference Kyoto's traditional architecture, including the machiya houses that are unique to the city. 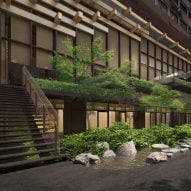 Mesh screens and louvres allow the breeze from the courtyards to filter into rooms.

Art and sculpture feature throughout, including works by Japanese textile artist Samiro Yunoki.

"I intended to design a cultural catalyst for various people to visit and create a seamless relationship with Kyoto's community," said Kuma.

The designers aimed to create a fusion of American and Japanese style, referencing the work of western architects and creatives that spent time in the country, such as Charlotte Perriand and JB Blunk.

"The design concept for the hotel is rooted in an exchange between east and west through arts and crafts," explained Commune's design principal Roman Alonso.

"Although we looked all over Japan for artisans and craftsmen to collaborate with on the project, there is a high concentration of artists from Kyoto prefecture involved in the project," he added.

There are a variety of different room types to choose from. As well as western-style doubles and kings, there are also tatami suites, where futons with traditional tatami mats replace beds.

Some of the rooms come with turntables and Tivoli radios, while some also feature Japanese soaking tubs.

Ace Hotel first launched in Seattle in 1999. It now has numerous hotels in the US, along with an outpost in London. A Toronto ace is also scheduled to open in 2020.