References to the landscape and industrial heritage of Australia are woven into the Ace Hotel's new outpost in Sydney, with interiors designed by local practice Flack Studio.

On the ground floor, public spaces include a lobby, bar and lounge, a neighbourhood restaurant and a day-to-night cafe, while the building's top floor is occupied by a rooftop restaurant designed by Australian interiors studio Fiona Lynch Office.

Describing the project as a "deep homage" to Australia, Flack Studio said the interior draws on the warm neutural tones of the country's desert landscapes and the paintings of Aboriginal artist Albert Namatjira.

The hotel has sandstone feature walls on the ground floor, a red marble staircase that stretches from the lobby to the first floor and terracotta-coloured tiles in the guest bathrooms.

A sunken lounge on the ground floor is rendered in shades of caramel and burnt orange – reminiscent of the easygoing design favoured in Australia's suburbs in the 1970s – while abundant planting throughout the hotel recalls the country's lush rainforests.

In the Ace Hotel Sydney, this can be seen in the off-form concrete walls, locally sourced timber and aged brass that reflect the utilitarian history of the building and the neighbourhood.

The hotel's 18-storey brick building was originally erected in 1916 to house the factory and distribution centre of chemist chain Washington H. Soul Pattinson.

It also sits on the site where one of Australia's oldest ceramic kilns was discovered, used by potter Jonathan Leak to produce domestic pottery as early as the 1820s. 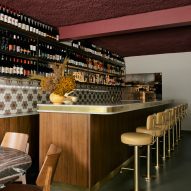 A sense of craftsmanship is conveyed through glazed ceramic room signage and hand-painted details on the entry signs.

The hotel's guest rooms feature custom lighting, furniture and fixtures and are designed to feel cosy and residential. Each room features a Rega turntable and a vinyl collection put together by Melbourne-based record label Efficient Space.

Other highlights include an art collection curated by Flack Studio that showcases the works of contemporary Australian artists and a minibar stocked with goods from local producers.

In the coming months, the hotel is also set to launch a residency programme spotlighting First Nations artists.

Ace Hotel was founded in Seattle in 1999 and now has locations in cities including Los Angeles, New Orleans and Kyoto.

Last August, the hotel chain opened its Brooklyn outpost, which features art in every room and a public gallery in its lobby that houses rotating exhibitions. Ace Hotel's next location in Toronto is due to open in 2022.

The photography is by Anson Smart and Nikki To.