Los Angeles design firm Studio Shamshiri and Ace Hotel's in-house creative team have designed this hotel in New Orleans as if it were the home of a worldy woman who has filled it with decorative souvenirs.

It occupies a six-storey stone building that was completed in 1907 as the former City Hall Annex, and has been used for various civic facilities since. The new hotel is across the road from Ace Hotel's existing New Orleans outpost, which opened in 2016.

"The building itself just kind of says this is the grand space, the luxurious space," Ace Hotel group president Brad Wilson told Dezeen. "A lot of our thought process went what is like true luxury."

Studio Shamshiri, which brother and sister Pam and Ramin Shamshiri founded in 2016, was enlisted to help design the overhaul. It came up with the concept that Maison de la Luz was the home of a well-travelled woman who has just returned to the city.

"We really wanted it to feel like you're in someone's home," Pam Shamshiri said.

"We came up with this woman who is very worldly," she added. "She's left New Orleans and come back, having collected all these cross-cultural objects."

The playful interiors draw on the history of the building as well as reference a mix of places, including French, Spanish and African origins. These are intended as a nod to the multi-cultural history of New Orleans, which is often described as a melting pot of cultures.

Guests enter Maison de la Luz into a grand lobby, featuring two sets of decorative stairs that lead up the building. A custom-made chandelier hangs down the centre of the space with circular lights etched on the inside for a delicate glow.

A set of double doors lead into the reception area and an adjoining Egyptian-style guest lounge. The room is furnished with bold yellow sofas and chairs with tassels trims that are cut short to reveal their legs – a detail Shamshiri says is reminiscent of women lifting their skirts.

Seating is arranged around a fireplace designed by a UCLA graduate student, while artwork draws on Egyptian references. These include large paintings, masks and the symbol of an eye, which is painted on the ceiling and partially covered by a mirrored breakfast bar.

Glazed doors lead from here into a dining area, decorated with white scalloped tables and blue banquets. Large bees and plants adorn the wallpaper that lines the room, as a tent-like trim runs along the top.

While these areas on the ground floor of the hotel draw on a variety of influences, the suites are based on French hotels as a nod to the luxury of the property, according to Shamshiri.

The rooms, which range from double bedrooms to deluxe one-bedrooms suites, are flooded with natural light from the building's large windows. The team chose a custom pale mauve paint to wash over the walls, and bright white bed linen to keep the rooms bright and airy. Bold blue bed frames with undulating tops punctuate the spaces.

Other nuances are more subtle, including brassy hand-shaped hooks and a decorative crest that is laid atop each bed. Carpets and rugs bare a pattern created by Christopher Farr, to reference the Egyptian features in the lobby. A patterned sofa is intended to look like one that could be found in a grandmother's living room.

Artwork is arranged in ensembles above the beds, while bedside tables are topped with glass vitrines by Los Angeles artist Clare Crespo. The ornaments are intended to reflect the spiritual folklores that New Orleans is famed for, and contain a lock of Crespo's daughter's hair inside. 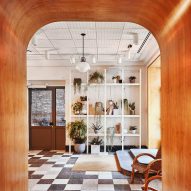 Guests can enjoy an aperitivo in the hotel's private bar area – a secretive space is tucked into a nook on the ground floor – ordering drinks from a barman by tapping on a painting.

A door from here leads into Bar Marilou, which is open to the public and has a separate entrance. On the other side, the doorway is disguised as a shelf filled with an eclectic mix of books.

The bar, which occupies the former law library of the old City Hall Annex, is painted in bright red and furnished with eclectic pieces, including vintage outdoor furniture and animal print stools.

"It's our block, our neighbourhood," said Wilson.

Atelier Ace creative studio was set up as an offshoot of the Ace Hotel chain, which was started by late hotelier Alex Calderwood in 1999.

Along with New Orleans, the chain features outposts across the US in Chicago, Los Angeles, New York, Palm Springs, Pittsburgh, Portland and Seattle. London and, in the near future, Kyoto are among its international spots.

Maison de la Luz marks the second boutique that the studio has created outside of the original Ace Hotel brand, following on from Sister City hotel in Manhattan.

Photography is by Stephen Kent Johnson, unless stated otherwise.