In this exclusive video interview filmed as part of our high-tech architecture series, British architect Norman Foster explains how the headquarters he designed for HSBC in Hong Kong in the 1980s transformed his architecture firm into a global brand.

The 44-storey-high Hong Kong Shanghai Banking Corporation Headquarters was completed in 1985 by Foster Associates, which the British architect established with his then-wife Wendy Cheesman.

Located near the harbour in central Hong Kong, the project was instrumental in establishing the firm as an international practice, according to Foster.

"It was not just inventing a particular kind of tower that hadn't been done before," Foster told Dezeen in an exclusive interview at his London office.

"But it was also starting to re-inform and redesign [the practice] as a design organisation. In that sense, Hong Kong was more than just a building."

The building was originally conceived in response to a 1979 competition held by global financial firm Hongkong Shanghai Banking Corporation, known as HSBC, which called on architects to create "the best bank building in the world".

Now referred to as HSBC Main Building, the tower shares motifs with many of Foster's early projects, including visible cross bracing, open-plan interiors and an abundance of steel and glass. 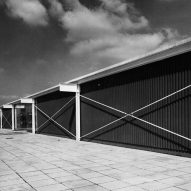 These features characterise high-tech architecture – a stylistic movement that emerged in the UK in the late 1960s and spread throughout Europe – but were unprecedented in Hong Kong at the time.

"It was the first tower without a central core," Foster said. "The lifts, the staircases, the mechanical equipment have been taken out and are expressed on the sides for all to see."

The firm elevated the building's entrance of the building to the first floor, enabling members of the public to pass through and congregate beneath.

"The idea – on this congested site – that you could walk underneath the building [was unheard of]," said Foster. "A banking hall had always been on the ground floor."

A pair of escalators ascend through a latticed glass floor, arriving in a tall central atrium filled with natural light.

The brightness of the space is owed to what Foster describes as a "mirror scoop" fitted to the south facade of the tower, which bounces daylight onto the mirrored ceiling of the atrium.

"A high-rise building with a mirror scoop on the sunny side, reflecting light through a mirrored ceiling so it would cascade down as you moved up," Foster said.

"That was something that is still an extraordinary experience. But right then, nothing like it had ever been seen."

The building, which was largely pre-fabricated, also introduced cutting-edge technology to Hong Kong, according to Foster.

"Hong Kong bank was an extraordinary venture because it wasn't a building that could have been built in Hong Kong," he said.

"Hong Kong then did not have the technology, the fabrication. It was truly a component building that was shipped from America, Japan, the UK, and assembled on site."

"In that sense, it was totally pre-fabricated," he continued. "The bathrooms would come totally sealed. And they had everything in there, right down to the disposable towels, the toilet roll holders, the washbasins."

Since the building's elements were manufactured in different countries around the world, the project also led to Foster travelling internationally. This set a precedent for the future of the practice, which came to be known as Foster + Partners.

"Everybody expected that I would move to Hong Kong, given a project of that enormity and significance. Counter-intuitively, I didn't do that," he said.

"I elected to be mobile. I would go backwards and forwards, moving between factories and sites. So I'd be frequently in Tokyo, the United States, here in the UK."

"That has set a pattern of travel and lifestyle which persists for me to this day," he continued. "And also explains the mobility of colleagues and teams within the practice".

HSBC Main Building set the young practice on the path towards becoming one of the most prolific architecture firms in the world, and heralded a restructuring of the organisation to accommodate international projects.

Foster established Foster Associates in 1967 with Cheesman. The company was renamed Foster + Partners in 1999.

It follows our video interview in which Foster spoke about the challenges he encountered while designing the Sainsbury Centre for Visual Arts, and his explanation of the Reliance Controls factory, which was completed as part of Team 4 in 1967.

Emerging in Britain during the late 1960s, high-tech architecture was the last major style of the 20th century and one of its most influential. Characterised by buildings that combined the potential of structure and industrial technology, the movement was pioneered by architects Foster, Richard Rogers, Nicholas Grimshaw, Michael and Patty Hopkins and Renzo Piano.

Photographs are by Ian Lambot, Ben Johnson, Nigel Young and John Nye. Drawings are by Norman Foster. Images courtesy of Foster + Partners and the Norman Foster Foundation. Illustration is by Jack Bedford.