Artist Alexandra Daisy Ginsberg discusses the nuances of what it means to design "a better world" in this video of her keynote at Dezeen Day.

Ginsberg, who is known for her work in synthetic biology, was one of three keynote speakers at Dezeen's inaugural conference on 30 October.

In the lecture she spoke about some of her latest projects, which spark conversations around the effects of climate change and the use of technologies such as artificial intelligence to "better" the situation.

She discussed the confusion around this term, and the idea that using synthetic biology could make biology better, and could even better nature itself.

"Designing a better world is a promise I hear a lot working as an artist in design and technology," she said.

"We design to improve things, to transform existing situations into preferred or 'better' ones – we assume that design makes things better, but what do we mean by 'better'?"

"How does a word that has so much power in our contemporary world – a word that we invest so much in – not have a shared or fixed meaning?"

As Ginsberg explained, design is used to solve problems, but often creates new problems in the process. This is because we are designing to solve problems with human measures, rather than thinking about what would benefit nature.

The artist spoke to the Dezeen Day audience about some of her work that aims to urge people to think more about their actions in the present, and how we can do better for other species.

One of these projects, called Resurrecting the Sublime, saw the artist reconstruct the smell of an extinct flower.

The "design challenge" for Ginsberg was to give visitors a feeling of loss for something they didn't know they had lost in the first place, to remind people of the implications of their actions.

"How do we get people to care?" she asked. "How do we use these stories and incomplete memories to change our actions in the present – to do better for other species, other places and other peoples?"

"When situated in the present, looking forward, there is just one vantage point from which to look at the future, and it also doesn't allow us to change in the present, and I would argue that that is where change is needed," the artist continued.

Ginsberg, who studied architecture at Cambridge University and Design Interactions at the Royal College of Art before earning a PhD from the RCA, held her first solo exhibition titled Better Nature at the Vitra Design Museum Gallery last year.

The other keynote speakers at during Dezeen Day, which was sponsored by Grohe and took place at at BFI Southbank, were film director Liam Young and curator Paola Antonelli. 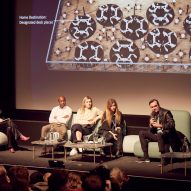 Young played some of his science fiction shorts and narrative documentaries to the Dezeen Day audience to explain his use of film-making techniques to visualise the impact of emerging technologies on the future of the planet.