British artist Alexandra Daisy Ginsberg's solo show at Vitra Design Museum asks questions about our place in the natural world. We look at the six projects on display in the exhibition.

Each of the works in Ginsberg's Better Nature exhibition aims to look at the relationship between nature and technology to investigate why we design things the way we do.

One piece reconstructs the smell of an extinct flower, whilst another imagines a factory farm where "parts" are grown on plants.

"Design can help us think about the choices that we make, what we value and what we say we value," Ginsberg told Dezeen in the lead up to the show.

"The world as we know it won't exist for much longer," she said. "You can come to terms with it, and accept that the world doesn't necessarily need humans in it, nature will continue in some form."

Ginsberg looks for "an emotional response"

In the exhibition, Ginsberg seeks to make the viewer feel emotional about technology and nature.

"I'm trying to evoke emotion," she said. "We can all berate ourselves for living unsustainable lifestyles, but I'm experimenting with how do we tell stories that help us focus on an emotional response to complex issues."

This might spark visitors to investigate the issues surrounding our destruction of the natural world in the anthropocene – a term used to describe a new geological era in which human impact has become the dominant force on the planet. 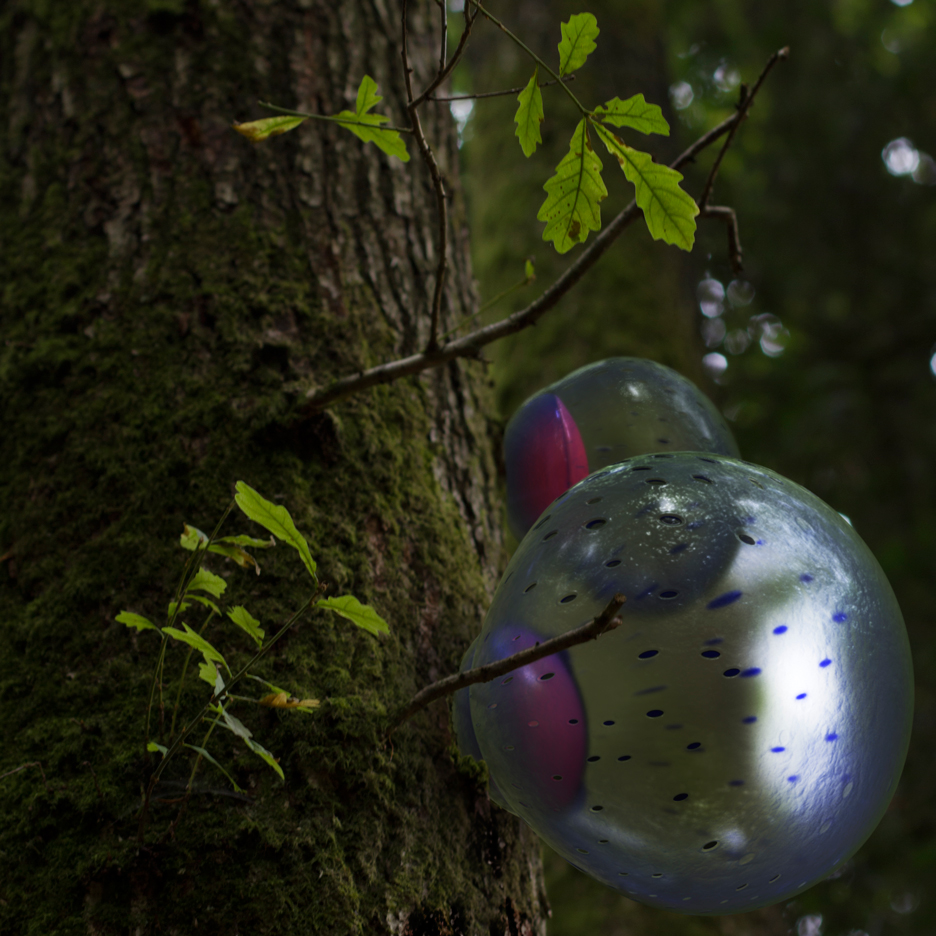 In Better Nature, Ginsberg has used emerging technologies to create these narratives. Each of the projects aims to use technology both to understand how it works, and as a way to examine its implications.

"We see nature and technology as separate things," she said. "We make new technologies and decimate nature, but ultimately we are part of it. Often the solutions to our problems are social and not technological."

Ginsberg, who sees herself as an artist who's interested in design rather than a designer, doesn't think that we will solve the problems facing the world until there's a cataclysmic reason to do so. She believes that solutions will be implemented by people in positions of power, but arts and designers have a play a part.

"In what designers do is a desire to make a better world, and that optimism is at the heart of design," said Ginsberg. "I'm trying to incite people into action but I'm not offering a concrete solution, instead I'm using design to ask questions."

"If you think the world is terrible, it still means you think it could be otherwise."

Here are the six projects in the Batter Nature exhibition:

Showing for the first time at the Vitra Design Museum exhibition, this ongoing project imagines a version of the future in which Mars is colonised by plants rather than by humans.

"We're not saying Mars will be better if we colonise it just with plants and never go there. It's just a different way of thinking about it and through that difference it's a way to look back on earth and on ourselves," explained Ginsberg.

Shown as a video loop that represents a million years in an hour, the visuals of sixteen different sprouting plants borrows from the aesthetic of video games. Multiple simulations run in parallel on six screens to demonstrate the various possibilities for colonisation, none of which are intended for human benefit.

"Why do we need to go to Mars? It's not a viable place for humanity to escape to once we've trashed this planet. The air is like dry-cleaning fluid!" said Ginsberg.

"We create other worlds as a place to reflect on ourselves and our own nature."

Immersive smell installations, video works, images and documentary film combine to create a version of flowers that have been driven to extinction by humans in this project.

"Extinction is the product of earlier generations' version of better because they wanted cattle farms," explained Ginsberg. "Things that we don't even know were lost were lost."

With smell researcher Sissel Tolaas and a team at the biotechnology company Ginkgo Bioworks led by Christina Agapakis, they extracted DNA from specimens stored in Harvard University's plant library to recreate what the lost flowers might have smelt like.

She premiers the third flower in the series, Leucadendron grandiflorum (Salisb.) R. Br, at the Better Nature exhibition.

"Is a synthetic version of this flower enough, or could it remind us of the implications of our decisions when we're very far away from those places?" she said.

Designing for the Sixth Extinction, 2013

This project imagines a future where species designed by synthetic biologists exist alongside endangered species to support them. By preserving biodiversity we can ensure a library of DNA that can be used to create new organisms in the future, Ginsberg believes.

"If nature is totally industrialised for the benefit of society—which for some is the logical endpoint of synthetic biology — will nature still exist for us to save?" Ginsberg asked.

The invented creatures include a slug-like animal with a short lifespan that neutralises acidic soil caused by pollution, a spiky autonomous device that presses seeds into the soil, and a self-replicating biofilm that covers leaves trapping harmful airborne pollutants.

Goods would no longer need to be shipped around the world but could be grown in factory farms from genetically modified organisms, in this project created with Sascha Pohflepp that harnesses nature for production.

"Coding a product's design into the DNA of a plant, the parts would be grown within the supporting system of its structure,"explained Ginsberg. "When fully developed, the components can be harvested like walnuts from their shells or corn from their husks."

Product parts would grow on the plants' structure, "allowing us to harness the natural environment for the production of things" before being harvested for construction.

The project suggests seven potential future plants and displays them in the style of the 19th century scientific botanical illustrations by Sion Ap Tomos. Together the seven form the component parts of a herbicide sprayer that could be used to protect the synthetic biological creation from nature itself.

This group project created a 100-year timeline for the projected use of bacteria that secrete coloured pigments, which the team genetically engineered. Ginsberg previously discussed the project in a Dezeen video interview.

By 2039, they suggested, when eaten in yoghurt the bacteria could colonise our gut and provide an easy-to-read early warning signal for signs of disease, by colouring the poo.

Ginsberg worked with designer James King and seven scientists to produce the engineered bacteria and on the eventual personal disease monitor, which they called The Scatalog.

Other markers on the timeline that they used to express the project include pollution markers that Google might release into the atmosphere in 2069 to test the pollution levels in the atmosphere, and an imagined terrorist group protesting the fact that a Chinese company has isolated and patented the gene for orange.

This project from 2009 proposes a new branch for the Tree of Life that encompasses organisms engineered by humans, through a series of invented objects.

These include a colon that turns human waste into gold, a cup made from keratin secreted by engineered bacteria and a lung that can sense carbon monoxide from smoking. Together, the assembled objects imagine a future dominated by synthetic biology.

"How will we classify what is natural or unnatural when life is built from scratch?" asked Ginsberg.

Rather than relying on petrochemicals as the source of our materials, we could pick a feature from a living organism, isolate its DNA and implant them into an existing or constructed "biological chassis".

"Biotech promises us control over nature, but living machines need controlling," said the artist. "Biology doesn't respect boundaries or patents. Are promises of sustainability and healthiness seductive enough to accept such compromise?"