The developers of topped-out New York skyscraper 200 Amsterdam, designed by Elkus Manfredi Architects, are taking legal action after a court ruling to reduce the tower's height.

It is reported that the ruling may require the developers to remove roughly 20 storeys from the residential skyscraper, which topped out at 668 foot (203 metres) in August, although the exact amount remains unconfirmed.

Developers SJP Properties and Mitsui Fudosan America are appealing the decision in court. Boston firm Elkus Manfredi Architects, which designed the project, is not involved in the legal action.

"Ruling is a shocking loss for New York City"

"We will appeal this decision vigorously in court and are confident that we, and the city, will prevail on the merits," the developers told Dezeen.

"The ruling is a shocking loss for New York City and its residents. It defies more than 40 years of precedent in the city's zoning laws."

Since it was first unveiled in June 2016, 200 Amsterdam has faced opposition from community groups that have argued it was able to rise 52 storeys through a loophole in the law.

Formerly the site of a synagogue built in 1971, the property for the tower was enlarged after the developers purchased rights from neighbouring parking lots. This allowed them to create a much taller building than the initial site granted.

In May 2017, the building's construction was opposed and a challenge was filed with the city's Department of Buildings (DOB), which requested the developers respond to and solve issues.

The New York Supreme Court then ordered the Board of Standards and Appeals (BSA) to review the project again in 2019. Work continued while the zoning challenge was reviewed. 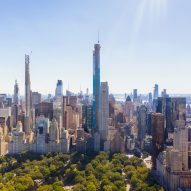 The developers claim the new ruling ignores "the thoughtful decision of the DOB to grant the permit which was upheld by the BSA following exhaustive document review and testimony over a two-year period".

Construction continues on the skyscraper at the intersection of Amsterdam Avenue and 69th Street despite these challenges.

New York City is host to many other supertall buildings, with recent additions including SHoP's skinny project under construction at 111 West 57th and Central Park Tower by Adrian Smith + Gordon Gill, which is the world's tallest residential tower.

Elkus Manfredi Architects has also designed the interiors of a shopping mall at Hudson Yards and a proposal to a turn part of Boston into a smart city with Sasaki Associates.

Renderings are by Elkus Manfredi Architects.