Architects Farshid Moussavi and Issa Diabaté will be joined by designers Paola Navone and Konstantin Grcic as judges for this year's Dezeen Awards.

The four are among the final set of 25 industry-leading names to be added to this year's panel, joining previously-announced judges Daniel Libeskind, Paola Antonelli, Jaime Hayon and Natsai Audrey Chieza.

Dezeen Awards, now in its third year, has quickly become the benchmark for international design excellence and the ultimate accolade for architects and designers worldwide.

You can save 20 per cent on entry fees until 31 March. Standard entry for Dezeen Awards 2020 closes on 2 June. 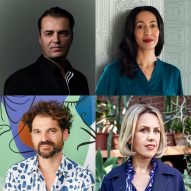 They will also be joined by Annabelle Selldorf, founder of New York-based architecture practice Selldorf Architects.

Dutch designers Pieke Bergmans and Nienke Hoogvliet will be scoring design projects with Grcic. They will be joined by Organisation in Design founder Margriet Vollenberg and London-based designer Sarah Izod.

These architects, designers and curators complete the list of 75 judges that will judge this year's entries based on the three Dezeen Awards criteria – beautiful, innovative and beneficial.

You can sign up to our newsletter to stay up to date with all awards-related news at www.dezeen.com/awards/subscribe.