Airbus has revealed a working model of its MAVERIC aircraft, which has a "blended wing body" design that could reduce fuel consumption by up to 20 per cent.

The aircraft takes its name from an acronym that stands for Model Aircraft for Validation and Experimentation of Robust Innovative Controls.

Measuring at two metres long and 3.2 metres wide, with a surface area of around 2.25 metres squared, the MAVERIC is currently a remote-controlled model demonstrator plane.

According to Airbus, if the plane was made full scale, its "blended wing body" design and could potentially burn up to 20 per cent less fuel than current traditional shaped aircrafts with the same engine.

"At Airbus, we understand society expects more from us in terms of improving the environmental performance of our aircraft," said Adrien Bérard, co-leader of the MAVERIC project.

"MAVERIC's blended wing body configuration is a potential game-changer in this respect, and we're keen to push the technology to the limit."

"Initially, many dismissed the MAVERIC project as merely a 'hobby', or, in other words, a project Airbus wouldn't learn very much from," he continued.

"So we had to prove them wrong by showing that we could deliver a very sound basis for future aircraft configuration."

If produced, the aircraft would feature a "shielded" engine mounted above the central body, meaning that noise pollution would be significantly reduced.

The MAVERIC would have a wide cabin layout. This would improve on-board experience on commercial flights, as passengers would benefit from extra legroom and larger aisles.

Airbus began developing the MAVERIC in 2017, before sending it on its debut test flight in June 2019 at a secret location in France. It was unveiled to the public for the first time last week on 11 February at the 2020 Singapore Airshow.

The plane manufacturer plans to continue test flights until the second quarter of 2020.

"By testing disruptive aircraft configurations, Airbus is able to evaluate their potential as viable future products," he continued.

"Although there is no specific time line for entry-into-service, this technological demonstrator could be instrumental in bringing about change in commercial aircraft architectures for an environmentally sustainable future for the aviation industry."

Airbus is currently working on several demonstrator projects in addition to the MAVERIC through its AirbusUpNext research programme, including its E-Fan X hybrid-electric propulsion aircraft and an autonomous air taxi.

The aerospace company recently revealed the concept designs for a hybrid-electric airliner with feather-like wings, which is inspired by the "efficient mechanics" of birds in flight. 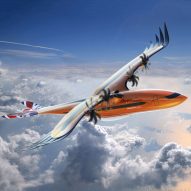 Dutch airline KLM and TU Delft also aimed to make air travel more environmentally friendly with a similar V-shaped aircraft concept, which is designed to consume 20 per cent less fuel than Airbus' A350.

The passenger cabin, cargo hold and fuel tanks are integrated into the wing structure, making the model smaller than the A350 and therefore giving it a reduced weight and less aerodynamic drag.