It is virtually impossible to create something truly green and ethical when clients commission one-off designs, said Italian design duo Simone Farresin and Andrea Trimarchi, who make up Formafantasma.

"Companies don't realise that it's not enough to ask designers to be sustainable," Farresin told Dezeen.

"You need to allow the designer to work in a way that is different, is more realistic. And that's a different approach."

Dezeen spoke to Formafantasma at the Rijksmuseum in Amsterdam, where the duo designed the Baroque in Rome exhibition that will be taken apart and reused afterwards.

"We took into consideration small changes that could be done to avoid waste," said Trimarchi. "But only with a long term collaboration with the institution could we make more long term and informed choices."

Instead of painting walls different colours, necessitating layers of repainting after the show, they used fabric that will be donated to schools afterwards.

The plain white walls will be used by the Rijksmuseum for the next two shows. But they pointed that they would have needed to be involved over a longer period to make the exhibition fully sustainable.

Brands are more much more aware of the importance of sustainable design, which is good, but can also be a problem for making systematic change, believe the duo.

"The lack of holistic vision is what is killing design," said Farresin.

"We have people ask us 'can you design a product that is recyclable, that is sustainable'. And you're like, well, that's not the point," he added,

"It's the process. It's sort of bizarre when you have this conversation."

The iPhone is "not very innovative" because it's hard to recycle, says Formafantasma

Trimarchi recounted a recent interaction with a company that asked them to design an item that could be recycled.

"We said no, let's work with you for three years of planning, where we go into all your production and packaging," he said.

It's also important to create "repairability" in products added Farresin, and to plan for "repairability initiatives if you do to allow people to repair your products".

Creating a sustainable item requires extensive research into the production process and planning for the full life of the product, they argued.

Always seeking something new is "problematic"

The pair believe the current system, which prioritises one-off collaborations between brands and young designers, needs to evolve.

"In the past, there were less designers and less companies. So designers were much more involved with the company," said Trimarchi. He wants brands to nurture longer relationships instead of "throwaway" ones. 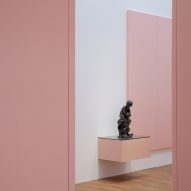 "Sometimes companies are only looking for the new and it's problematic," he said.

A company that treats its creative relationships as disposable usually has the same attitude towards material resources, they said.

"It's a way of systematic thinking that has a lot to do with fragmentation of responsibilities. Big corporations are structured in a way that there is somebody is at the top of the pyramid, but it's never clear who, and it's all about these little blocks where nobody's really responsible."

One area where this decentralisation is particularly prevalent, they said, is within technology companies. Formafantasma undertook a two-year research project looking at technology and e-waste and were horrified by the inefficiencies in the design of products such as iPhones.

"If you really want to make innovations, you need to be able to work with the sustainable development [team], the engineers, the designers of the product, but also the materials and finishing. But they are in all different departments, sometimes in different parts of the world," said Farresin.

Next month the studio will unveil its exhibition at the Serpentine Galleries in London. Called Cambio, from the Latin word for change, it will look at design's ecological and political responsibilities.

Trimarchi and Farresin will explain the research behind the exhibition to Dezeen's chief content officer Ben Hobson at an exclusive event at the Serpentine Sackler Gallery in London on 3 March. You can watch the livestream on Dezeen from 5:00pm UK time.

Photo is by Renee de Groot.