Luxury fashion house Balenciaga has presented its autumn/winter 2020 collection on a purposefully flooded catwalk to draw attention to the threat of climate change and rising sea levels.

Set within the Cité du Cinema film studio complex in Paris, the Balenciaga show took place on a central runway submerged under water, which was surrounded by an oblong amphitheatre of seats.

Although only a few centimetres deep, this water created the illusion of an almost bottomless abyss at the centre of the show.

The first three, most sought-after, rows of seating were also partially engulfed by water. This meant attendees had to watch from further back, at a slight distance from the spectacle.

An LED screen suspended from the ceiling flitted between natural scenes including crashing waves, churning clouds, swarming crows and bright red glowing lava, which were reflected in the water below.

Models in the first section of the show were dressed in all-black ensembles, while others donned branded wellies, galoshes and latex trench coats as they sloshed down the runway. 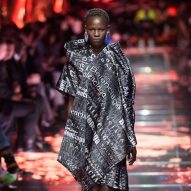 The collection saw creative director Demna Gvasalia expand his ongoing fascination with workwear – as seen in the famous Vetements DHL T-shirts – into a whole new set of professions in the form of priest's robes and football uniforms.

The music that accompanied the show alternated between ominous classical melodies and dark, aggressive techno to add to the oppressive atmosphere.

In keeping with the set's environmental message, the brand reportedly plans to have the water returned to, and reused, by the city of Paris.

Despite these efforts, the show still showcased 105 different outfits, at a time when activist groups including Extinction Rebellion are calling out the fashion industry for being one of the world's most polluting.

In 2019, the design for Balenciaga's spring/summer show was equally political, with a monochromatic EU blue set and a bespoke scentscape intended to captured the smell of power.

The year before that, Gvasalia took on the digital age by staging the show inside of a tunnel of LED screens, that created the impression of being inside of a computer.

Within the scientific community, rising sea levels have been an increasingly urgent concern, as they present one of climate change's most immediately tangible – and devastating – effects. A Dutch oceanographer recently suggested that erecting two dams in the North Sea could be a last ditch effort to defend Europe from the encroaching waves.