Musician Ye, who is also known as Kanye West, has launched his latest collection with retailer Gap and fashion brand Balenciaga at a series of dumpster-style pop-ups designed in collaboration with Niklas Bildstein Zaar.

Yeezy Gap set up surprise pop-ups, which were conceived in collaboration with architecture studio Sub co-founder Zaar, from matte-black vans with dove graphics printed across their sides in Miami, Los Angeles and Chicago.

One level of the concrete car park saw 20 black bulk bags – typically used to transport gravel and construction materials – stuffed with items from the collection and organised in a single row across the car park.

At other locations, black-painted waste bins were used to contain the masses of clothes forcing its customers to dumpster dive for goods.

The store redesigned with a minimal interior, with its light wood flooring, displays and colourful instore marketing and advertisements covered in a matte black lining. 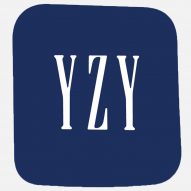 Usual retail methods of displaying clothing were abandoned and the store removed all clothes rails, shelving and hangers.

Instead, the Yeezy Gap engineered by Balenciaga collection was presented to shoppers on the floor of the store from oversized black bulk bags – each of which was labelled with relevant size and style codes.

Images of stormy skies and flying doves were projected across screens at the rear of the store while avatars from the brand's recently launched game fell through graphic space.

"Designed for the future, the store design represents a reinvention of physical retail rendered with minimal waste in either display or design," it continued.

"Gap's Times Square flagship store has been re-engineered and distilled to its most essential form in Yeezy Gap engineered by Balenciaga's vision of utilitarian design."

West's partnership with Gap was first announced in 2020 and is set to be a 10-year partnership.

In 2018, Willo Perron designed Yeezy's studio in Calabasas, California, which was given a minimalist look and celebrated "utilitarianism and brutalism".

The photography is courtesy of Gap.