Spanish artist Santiago Sierra carved a runway through mounds of mud from a peat bog for Balenciaga's Spring Summer 2023 show in Paris.

The artist filled the Parc des Expositions de Villepinte convention centre on the outskirts of Paris with 275 cubic metres of mud for the show, which took place on 2 October during Paris Fashion Week.

Designed and built by Sierra and architecture studio Sub, the set was created as a large pit of mud, which saw layers of boggy earth piled in mounds and troughs across the floor of the convention centre.

Sierra is a Spanish Madrid-based artist best known for performance and installation art that typically centres on social inequalities and poverty.

In 2005, Sierra created House in Mud – an installation at the Kestnergesellschaft art museum in Hanover where two rooms of the museum were filled with 400 tonnes of mud and peat.

Much like Demna's work at Balenciaga, the installation was a commentary on topical issues, specifically worker and labour rights, and responded to a government unemployment-relief program in the 1930s that led to the building of an artificial lake in Hanover, Germany.

At the show, a path was channelled into the mud-caked floor around a sunken pit at the centre of the space, marking a runway for models to trek through in Balenciaga's Spring Summer 2023 collection.

As models walked through the mud-covered set, footprints were left in the earthy substance for the next model to follow.

Mud splashed and covered the skin of models and luxury clothing and accessories, bearing comparison with Sierra's House in Mud where visitors were invited to walk around the space ultimately covering their shoes and clothes in mud.

"The set of this show is a metaphor for digging for truth and being down to earth," said Demna in a statement before the show.

"Let us let everyone be anyone and make love not war." 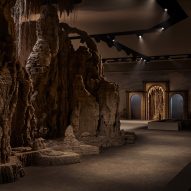 "Putting luxury fashion into the box of polished, exclusive and visually expensive is limited and pretty old school," Demna continued.

"Individualism in fashion is downgraded to pseudo trends dictated by a post in stories of some celebrity of the moment."

A custom-made scent created by Norweigian scent researcher and artist Sissel Tolaas, was pumped into the space and according to Vogue was said to smell like the "raw odeur of decomposition".

The show's closing look, a floor-length leather dress and matching gloves, was made up of pieces of the brand's city bag that were stitched and patched together.

After the show, Balenciaga explained that the peat bog mud will be collected by its supplier, horticultural company Florentaise, and reused across landscaping and horticultural projects.

The photography is courtesy of Balenciaga.