A new range of facade cladding tiles made of recycled PVC construction waste, designed by Dutch studios Overtreders W and Bureau SLA, has been used on a permanent building for the first time.

Called Pretty Plastic, the designers claim the product is the "first 100 per cent recycled cladding material" in the world.

The first permanent building to be clad in the hanging tiles, a school music pavilion in the Netherlands, was completed by Dutch studio Grosfeld Bekkers Van der Velde Architecten in January.

Grey diamond-shaped shingles are made from shredded PVC building products such as window frames, downspouts and rain gutters. They are hung in overlapping rows from a single screw.

First developed in 2017, the tiles received fire approval in class B (very difficult to burn) last year, allowing them to be used as a cladding material on external facades.

The tiles were initially developed for the People's Pavilion, a temporary auditorium constructed at Dutch Design Week in Eindhoven in 2017.

Designed by Bureau SLA and Overtreders W, the pavilion demonstrated how the principles of the circular economy could be applied to architecture, with every component designed to be used again once the structure was demounted.

The pavilion was clad in 9,000 bespoke moulded plastic shingles made of waste collected from local residents.

Architects Peter van Assche of Bureau SLA and Reinder Bakker, and Hester van Dijk of Overtreders W, then developed the shingles into a commercial product.

"After the success of the People's Pavilion many people asked us where the upcycled plastic facade tiles could be bought," van Dijk told Dezeen. "So we decided to start a new company called Pretty Plastic."

"For people looking for recycled materials that contribute to a circular economy, Pretty Plastic is one of the few products that can be used on facades," he continued.

Each Pretty Plastic tile is made from material collected from building sites across the Netherlands, before being sorted and shredded into five-millimetre-wide pieces.

After being cut up, they are shipped to Belgium where they are transformed into shingles by Govaplast, a company that makes materials from recycled plastic. 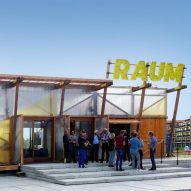 Pretty Plastic is currently available in a range of grey tones. Every tile has a unique finish created by the use of different plastic products.

The Sint-Oelbert Gymnasium school at Oosterhout in the Netherlands is the first permanent structure to be clad in the shingles.

Pascal Grosfeld of Grosfeld Bekkers Van der Velde Architecten enquired about the product after seeing them on the demonstration building at Dutch Design Week.

"As with many good things in life, the collaboration came by chance," said van Assche. "Pascal Grosfeld had been interested in the plastic tiles since he visited the People's Pavilion."

"Pascal and I both attended the Sint-Oelbert Gymnasium as teenagers," van Assche added. "Pascal and the school loved being the guinea pig for Pretty Plastic. We loved that too."

Overtreders W and Bureau SLA are now working on expanding the range by developing a range of new colours and shapes.

The role of plastic in a circular economy was a hot topic at the first Dezeen Day conference. In one of the panel discussions, Dutch designer Richard Hutten referred to plastic as "the cancer of our planet", while the CEO of the Ellen MacArthur Foundation Andrew Morlet argued that we need to "keep it in the system".

In another discussion at the one-day conference, architect Arthur Mamou-Mani argued that "we still need" plastic while designer Nienke Hoogvliet said that "we shouldn't produce any more".

Photography is courtesy of Sint-Oelbert Gymnasium.