MVRDV founding partner Winy Maas said he imagines "a city where my mobility is at my balcony!"

"As cities become denser and technologies improve, it becomes increasingly clear that the truly three-dimensional city – one that includes flying vehicles – is surely one of the city models of the future," added Maas.

The Dutch architecture studio looked at how vertiports could integrate aerial and terrestrial transport links in cities around the world including Shenzhen, Jakarta, Sao Paolo, Los Angeles, and San Francisco.

One case study looked at how passenger drones could take people to the Coachella music festival.

Others looked at how tourist destinations could be linked up in Shenzhen, or fly above traffic in Los Angeles. 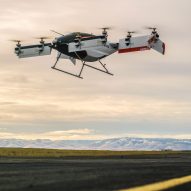 The report stressed that it investigated how these transport hubs could be placed so as to minimise noise pollution and be "beneficial for people of all backgrounds".

Disadvantaged neighbourhoods and remote urban areas could be connected by air without the need for the expensive infrastructure needed for trains or cars.

In developing countries, cities that don't have established public transport networks such as a subway system could leapfrog straight to vertiports, suggested the report.

"Vertiports are thought of not just as stations, but also as hubs of renewable energy, data, and public amenities, that can scale while remaining sustainable and resilient," it said.

"Air transport incentivises an ecologically responsible contribution to the local smart grids of energy and data."

The UAM report also looked at how vertiports could double up as "opportunity hubs" by hosting education and medical facilities, or serving as incubators for new businesses.

MVRDV worked with Squint/Opera to present their findings in an immersive exhibition called The City and the Sky Above for the 2019 Bi-city Biennale of Urbanism\Architecture in Shenzhen.

Many companies are thinking ahead to the future of flying vehicles. Uber has already released designs for UberAir Skyports, aerial taxi landing pads that could serve vehicles that can take off vertically. In London, a different company called Skyports is buying up rooftops that could be converted into a network of ports for drones.

Boeing has completed a test flight for an autonomous passenger drone that runs on electricity.

Dezeen's first documentary, Elevation, examined how drones will transform cities and the way people travel within them. In the film Architect Mark Dytham outlined a future similar to the one MVRDV and Airbus describe.