Dezeen today releases a short documentary setting out how drones could revolutionise the way people travel, transform how buildings are designed and built, and radically alter the form cities take.

Called Elevation, the 18-minute movie explores the impact autonomous flying vehicles will have on our lives, and discusses both the positive and negative implications of a future when drones are as "ubiquitous as pigeons".

"What we're seeing now that drones are in the hands of every person on the street, they're potentially as disruptive as the internet," says speculative architect Liam Young, one of the many leading drone experts interviewed exclusively for the movie.

Drones will "change the way we relate to each other"

"They're going to fundamentally change the way that we relate to each other across space, across territory and across the city, continued Young."

"Ten or 15 years ago, drones were immensely expensive, complex objects, and now you can just buy them at a toy shop," says Priestman.

A year in the making, Elevation is the first documentary to explore the impact of drones. It brings together for the first time real footage of drones delivering packages, laying bricks and performing complex and repetitive tasks such as checking infrastructure and spraying fields.

First documentary to explore the impact of drones

The documentary also presents futuristic scenarios showing how swarms of unmanned aerial vehicles, or UAVs, could relieve congestion on roads, and transport both goods and people.

"Delivery drones are here right now," says Priestman. "You can go online and look at them delivering objects all over the world. And I think the next step is going to be humans travelling in drones. The technology is there and I think this is going to happen quite quickly."

"I think you could well see the development of aerial highways," says Norman Foster. "So if you have a motorway the airspace above that would be a natural route, in the same manner that the heli routes in London follow green spaces."

As urban transportation moves from the ground into the air, the entire way cities expand could be overturned.

"We used to think of cities as being agglomerations built around large, permanent infrastructure networks," says Young. "Road networks, water, power. What the drone had the potential to do is totally rewrite that because all of a sudden you're dealing with a form of nomadic infrastructure that can move and drift around the city."

Priestman agrees, saying: "Up until now, cities have been very much developed on roads. Once we're released from that, it allows development in different ways."

Priestman compares the potential impact to that of the first railways, which allowed cities to expand dramatically along these new linear routes.

Impact could be as big as the first railways

"I think with flying autonomous vehicles there could be an equally big step change in cities because we're not bound by linear infrastructure, because you can fly wherever," says Priestman.

Architect Mark Dytham believes that buildings will have to change to accommodate drones, which will be so numerous they will swarm like a "cloud of wasps" in the urban skies.

Dytham says his architecture firm, Klein Dytham Architecture, is already working with clients whose briefs are changing thanks to UAVs.

"We're working with a project in Tokyo already where the drone question is coming up," he says. "It's for a large warehouse. The actual location of the project has changed. The warehouse is coming closer to town, [it's] getting smaller because the drones can only take smaller packages. So all of these things are really changing the cityscape."

It also includes footage showing how drones could transport people, including clips from Uber's recent Skyport initiative exploring how its proposed flying taxis could herald new forms of architecture.

Elevation also discusses the impact of drones on the construction industry, presenting recent experiments where drones are used to lay bricks to create structures or weave cables to manufacture a bridge.

"I believe there will be a huge impact on the built environment once we actually start using these machines in construction," says Ammar Mirjan, a researcher at Gramazio Kohler Research at ETH Zurich who worked on a project exploring aerial construction.

"Effectively this allows us to access points in space we couldn't access before. We can assemble things differently. It doesn't matter anymore whether we necessarily build from the ground up."

"Others like Carlo Ratti are using drones to paint facades, to basically do large scale paintings, because all of a sudden a very large facade of a building which used to be very complicated and needed scaffolding becomes very easy because the drone becomes the brush," he continues.

"It is changing architectural photography because it's giving us a whole range of new perspectives on a building, whereas before we were limited to the ground," Reeve says. "I think the use of drones in photography will start to change the way architects design their buildings, because these buildings will be seen from all sorts of angles."

The elevated viewpoint people can experience through drones is changing our perception of the world, according to figures in the film.

Drones change how we see the world

"There's this overview effect that you experience that astronauts used to experience," says Jain, co-founder of Superflux. "They see the world and the earth from the point of view that was previously restricted to people that could go that far. But with a drone anyone could momentarily experience flying while still having your feet grounded and that's really incredible."

"Drones are like an expanded consciousness," says Marina Otero Verzier, head of research and development, at Het Nieuwe Instituut. "It's almost like an extra eye that allows us to reach places that otherwise we would never reach."

This freedom is potentially liberating and democratising, since cheap drones give ordinary people the same power as authorities.

"Before the power was in the hands of the police, but now a crowd can launch a bunch of drones in the air and document police violence, or they can make people accountable," says Liam Young.

Military-grade technology in the hands of everyone

Affordable drones are also a powerful tool for architects and designers. "Day to day we use a drone a lot," says Dytham, who carries a small, folding camera drone with him at all times and uses it to survey sites and inspect progress on projects.

"They will just fly over and give you a 3D model with a texture map of the location," he says. "You just get a data set you could not acquire by any other means. You could never have that precision and that resolution and that's a real game changer." 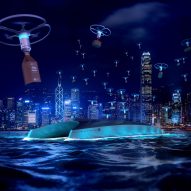 However this ability to fly anywhere, to see the world from any viewpoint and to record information unchecked has potentially dark implications.

"I think we should question whether we want drones to be part of the civilian space of our cities," says Otero Verzier. "The fact that it is available as a technology doesn't mean that we want it to be part of our lives."

Privacy is one area where drones will have a profound impact, she says.

"What now is a very attractive space on the top floor of a highrise with wonderful views suddenly becomes the perfect scene for drone surveillance. So questions about privacy and security are being redefined because of the drones and that affects the way we think about buildings as architects and designers."

"If this is your private apartment and there's a drone the other side of that pane of glass and you have to draw the curtains, then that does raise a whole series of other issues," continues Foster. "So like any emerging technology it raises other social issues."

The potential to use drones for destructive purposes is also raised in the film.

"It's surprising how little has happened with commercially available drones that you buy on Amazon, because there is stuff that can carry considerable payloads," says Weisshaar.

Drones could turn against us

"There's been a lot of near misses at airports. But also just dropping things into a crowd is a real option, it's a real option. And gladly nothing has happened there yet, but it will," he says.

Elevation contains footage of ISIS fighters launching home-made drones that drop bombs, and a shocking sequence of a pistol strapped to a drone that fires shots remotely.

"The reason why we're having this conversation now, where everyone is talking about the drone now is because it's now got to the point where that technology has become democratised because they're now in the hands of everybody," says Liam Young, concluding the movie.

"And then you start to see them being used for ways in which they weren't intended. It's an urgent moment to be thinking about what the possibilities are."

Elevation was conceived and produced by Dezeen's in-house video studio and was directed by Marcus Fairs and Oliver Manzi. It had its world premiere at Public in New York yesterday, 20 May. Further screenings are taking place in Venice and London this week, with many more scheduled around the world over the coming weeks.

Producers were Ben Hobson and Calum Lindsay, editing was by Oliver Manzi, with camera and motion graphics by Miguel Santa Clara. Sebastian Jordahn was production assistant. Sound design and mix is by Mikkel H. Eriksen of Instrument Studio.

The 90-second trailer for Elevation was launched in Hong Kong in March. UK culture secretary Matt Hancock described the trailer as "mind-blowing".