Airbus' autonomous, electric air taxi has successfully made its first test flight, after plans for its development were released back in January 2017.

The passenger drone, known as Vahana, flew fully self-piloted at 8:52 am on 31 January 2018 in Pendleton, Oregon, reaching a height of five metres (16 feet) for a duration of 53 seconds.

"In just under two years, Vahana took a concept sketch on a napkin and built a full-scale, self-piloted aircraft that has successfully completed its first flight."

Airbus plans to roll out fleet of flying taxis

Vahana is a project developed at A³, the Silicon Valley branch of Airbus. The company announced its plans to fly the aerial vehicle last January at the DLD digital tech conference in Munich.

In his keynote speech at the conference, Airbus CEO Tom Enders stated that the company would be investing in driverless technologies and artificial intelligence, which could lead to them developing a fleet of flying cars. 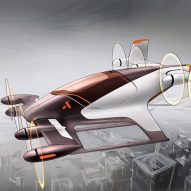 Designed to minimise traffic on inner-city roads, Airbus sees the electric vertical take-off and landing (eVTOL) aircraft as a solution to the growing need for urban mobility.

"Our goal is to democratise personal flight by leveraging the latest technologies such as electric propulsion, energy storage, and machine vision. Our first flights mark a huge milestone for Vahana as well as the global pursuit of urban air mobility," said Airbus.

"We envision Vahana being used by everyday commuters as a cost-comparable replacement for short-range urban transportation like cars or trains. No more traffic accidents or train delays to impact your plans," it added.

Vahana could also be used for cargo delivery

But Vahana is not restricted to air taxi usage. The company predicts it to be as diverse in use as a regular ground-based vehicle – able to be used as a cargo delivery platform, an ambulance, for search and rescue, as a mobile hospital, a limousine, or even as a tool to deploy modular infrastructure in disaster sites.

When Airbus released its plans for Vahana, they said that the aim would be for people to book the personal aircraft using an app, similar to car-sharing schemes such as Uber.

Uber has also invested in aerial transport, announcing its plans for a 2020 aircraft taxi service and debuting the cabin of its very own air taxi at the Consumer Electronics Show this year.