Bosses of Milan's Salone del Mobile furniture fair will meet this week to "assess the situation" as Lombardy and several northern Italian regions were locked down due to the coronavirus outbreak.

The midweek meeting, which was scheduled before Italian prime minister Giuseppe Conte signed the emergency decree last night, will examine the impact the ongoing outbreak will have on the fair, which was last month postponed from April to June.

"I gather there is a meeting scheduled for this week to assess the situation, and that was before the recent news," a designer close to the fair told Dezeen.

The decree affects 16 million people in the Lombardy region – Italy's financial and industrial powerhouse and home to much of the country's design and fashion sectors – and 14 other northern provinces including Venice, Parma and Treviso.

Designers in the city reacted with shock this morning to the dramatic escalation in Italy's fight to slow the spread of the virus, which has now killed 197 people in the country with 4,600 people testing positive.

"We can't go in and out apart from important working reasons or family," one designer told Dezeen. "All the activities stopped. Bars and restaurants must close at 6pm and people have to sit one metre apart."

The designer said it was unclear at this stage whether people were allowed to move around within the affected red zones, or whether they had to remain at home. 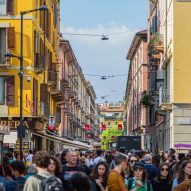 "The point is to make the diffusion of the virus slower so that the hospitals don't go into crisis," the designer said. "I think many other countries will have to follow."

"Everyone is really shocked," another Milan designer said. "I don't think it's really hit everyone that nobody can come or go for a month."

"They might as well have created a leper colony like it's like medieval times," the designer added. "It's truly bizarre in modern times to confine 16 million people inside one area."

One Milan design studio emailed its staff early this morning explaining the implications of the decree, saying: "The only form of work allowed is, in fact, smart working."

Another designer said that one Milanese fashion brand was already checking the temperature of employees as they arrived for work. Anyone with a high temperature was being sent home.

Brands and designers deciding whether to exhibit in Milan

However, the organiser of one of the key fuorisalone events that take place alongside Salone del Mobile said that the media were exaggerating the situation and causing panic.

"Newspapers are doing bad work," the organiser told Dezeen. "It's not really like how they describe it. I think June will still be fine [for Salone del Mobile to go ahead]". 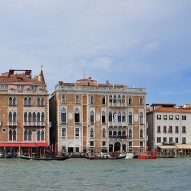 Many brands and designers are still deciding whether to exhibit in Milan this year. Many companies have followed Salone del Mobile and the fuorisalone events and rebooked for June, but glass brand Lasvit announced last week that it was cancelling its participation.

"Our decision is driven by the existing uncertainty about the situation and its development as well as the clearly lower willingness of people to travel," the brand said.

"At this moment, it is almost impossible to predict what will happen within the coming three months, especially when we speak about the area considered which is currently not recommended to travel to."

"I can't wait until June"

Another design brand told Dezeen it would switch its product launches to New York's design week in May. "I can't wait until June," the brand owner told Dezeen.

The rescheduled Milan fair clashes with Design Miami/Basel, while some Chinese brands are choosing to launch products at Design Shanghai, which has been postponed to 26-29 May due to coronavirus.

The Italian prime minister's decree bans all public and private events, including cultural events and trade fairs, in the newly declared red zones. It will remain in place until at least 3 April. People breaching the rules could be fined or jailed.

The decree allows "movements motivated from proven needs of business or situations of need or travelling for health reasons." But it is unclear how strictly the authorities will interpret "proven needs".

Italy's architecture and design calendar has already been heavily impacted by the outbreak of the Covid-19 strain of coronavirus.

The Salone del Mobile, the world's most important furniture fair, was forced to postpone until 16-21 June, while the Venice Architecture Biennale, the most prestigious architecture gathering, scrapped its traditional May opening and will now start on 29 August.