Architecture studio Anna and Eugeni Bach has converted a 19th-century chocolate factory in the Spanish town of La Bisbal into a family home and studio apartment.

Called Dirk and the Chocolate Factory after its owner, the architects preserved many interior details.

Located in the town's centre, a series of minimal modifications to the small brick and stone-clad warehouse created living spaces.

These open onto reimagined external areas for the home.

Each floor of the three-storey structure already featured a different construction technique, so Anna and Eugeni Bach sought to showcase these distinctive elements with their alterations.

On the ground floor, metal beams support a series of brick Catalan vaults.

These vaults run above a large living, kitchen and dining space.

This area opens onto a new patio area with a pool through a run of tall, thin doors.

White counter tops, storage and new fittings such as sockets have been installed directly against the exposed stone walls.

Above, the metal structure supports a wooden framework ceiling.

This upper level of more compartmentalised bedrooms is divided by white partition walls.

Walls stop short of this roof structure to create clerestory-style areas of glazing.

Above in the independent studio apartment, large wooden logs support a thin brick slab finished with a ceramic tile roof.

A large living, dining and kitchen space at this level mirrors the ground floor layout.

In the northern corner sits a double bedroom. 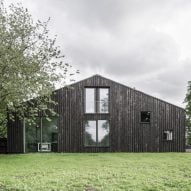 Each level is connected by the existing staircase of the warehouse, with an additional staircase added at the opposite end of the building.

"[The new staircase] allows multiple and flexible uses of both common spaces and rooms," said the practice.

"In this way, the owner's different members of the family can enjoy a part of the house with a good level of privacy and autonomy."

On the northern edge of the patio, a lower block houses an additional kitchen space that opens onto an external dining area alongside the pool.

Topped by a new steel-framed roof structure, a suspended concrete staircase leads up to a new roof terrace atop this single-storey element.

This terrace is shaded by a series of angular bamboo canopies that give the roof a distinctive silhouette.

Contrasting the rough, earthy tones of the existing structure, pale green has been used to accent doors, window frames and this new steelwork.

Previous projects by Anna and Eugeni Bach include a home combining a traditional stone-clad form with a skeletal steel framework, and the renovation of an apartment in Barcelona that features a desk hanging from the ceiling.