British designer Tom Dixon is releasing a series of furniture made from cork that has been charred to give it a rich, deep brown colour reminiscent of rosewood.

The Cork collection features a shelf, stool and three tables, with chubby, rounded silhouettes that are designed to let the material shine.

"When I was growing up we had cork floors and they had this amazing warmth and tactility," Dixon told Dezeen.

"It's also sound absorbent, fireproof, water resistant and lighter than water, which is why it floats, so it's easy to transport. In terms of a dream material, you couldn't really get a lot better."

The raw material itself is derived from the outer bark of the quercus suber tree, commonly known as the cork oak.

Today, the majority of it is used for the production of bottle stops, which are punched out of sheets of the bark. For the Cork collection, the remaining, pre-consumer waste material from this process was granulated and compressed into composite blocks.

At this stage the material was also charred, "a bit like popcorn" so it browns and expands. This means the final pieces are less susceptible to dirt, while also steering clear of an overly Scandinavian aesthetic.

The material was mixed with a small amount of polyurethane resin to bind it at a ratio of 93 per cent cork to seven per cent resin.

"We experimented with using no filler at all when we trialled the furniture in our restaurant in Milan, but people would pick out the granules and we couldn't really let that happen with the final collection," explained Dixon.

"It can still be continually recycled, even with the resin. Combined with waste tyres in can be used for flooring or playgrounds. There is pretty much no waste in the process, even the dust from the production is used to power the furnaces in the factories." 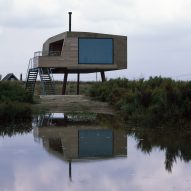 Dixon sources the material via the same Portuguese manufacturer that is also supplying cork for the 2020 Serpentine Pavilion designed by South African architecture studio Counterspace.

Thanks to its waterproof, fire retardant qualities, the material has historically been used in the production of shoes, as well as for flooring and wall cladding.

Today, it is experiencing a resurgence in design and architecture due to the fact that is it also recyclable and, according to Dixon, carbon negative as it can be harvested without harming the tree that it grows on.

"You're not cutting a tree down like you would for a wooden table or chair – all you're doing is skinning it," he explained.

"So you're planting trees with the long-term in mind and you harvest every nine years," he continued.

"All this time, the material effectively captures carbon as it grows. The tree continues to grow more bark, that bark captures more carbon and you're planting more trees to make more cork. Meanwhile, the carbon that's stored in the cork stays in the furniture pieces unless it is burned."

To keep transport to a minimum, the pieces themselves are also produced in Portugal, with the round tables and stools made from solid cork while the rectangular table and shelf have a cork veneer over a plywood and cardboard frame.

"Because they are so long, they would warp if they were solid cork," said Dixon. "So they have a cardboard and plywood base to hold them up."

The soft, rounded edges are created through CNC milling machines, with the offcuts reused to form new composite blocks.

"I was very angular before I was a dad," the designer remembered.

"But once you've had a kid walk into the corner of a sharp table you suddenly start rounding everything off," he continued.

"It sort of happened without me realising. But on a practical level, corners and sharp angles will deteriorate very quickly in a soft material like cork so it was also about making them less destructible."

Dixon first conceptualised the round table and stools for his Gardening Will Save The World installation with IKEA, which won a silver medal at last year's Chelsea Flower Show.

But this latest iteration sees the material used across a range of different furniture pieces, which will be available for purchase from the end of March.

There has been a marked rise in cork-clad buildings in recent years, from a Stirling Prize shortlisted house in Berkshire, England, to a Berlin home that repurposed waste from wine production.

British designer Jasper Morrison shared his own take on cork furniture last year, which was made from industry offcuts.