A retrospective on Irish modernist Eileen Grey in New York City includes furniture that has never been presented before.

The Eileen Gray exhibition on show at a gallery belonging to Bard Graduate Center spans three floors of a former townhouse on New York's Upper West Side.

It is the first in-depth exhibition of Gray in the US since a 1980 exhibit at New York's Museum of Modern Art and is organised in collaboration with the Centre Georges Pompidou in Paris.

Curator Cloé Pitiot of Centre Pompidou created the showcase to cover Gray's career as an artist, furniture designer and architect, which took her from Ireland, London and Paris to the South of France where she built the iconic modernist villa E-1027 in 1929.

Pitiot, who has organised previous shows on Gray's work at Centre Pompidou and at the Irish Museum of Modern Art (IMMA) in Dublin, said she wanted this exhibition to stand out.

"I didn't want to do the same exhibition," she told Dezeen during the New York opening.

"I wanted to continue my research," Pitiot added. "Because it's smaller here in the graduate centre, I wanted to have new pieces never shown before – masterpieces."

In total, the exhibition includes 200 works sourced from museums, private collectors and galleries. Tables, paintings and archival materials are among Gray's designs that have not been exhibited before. 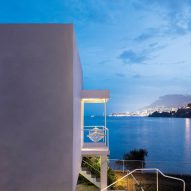 Among these is an oak dressing table and coffee table. Pitiot discovered the items in a new drawing that documented a model room Gray created at Salon de Société des Artistes Décorateurs in Paris in 1923.

The tables were previously credited to Gray but without this context.

"Now we understand exactly how it was and which pieces were there," she said. "We never saw it."

"Now I am trying to find more," added Pitiot, who is now looking for a white armchair shown in the picture.

Another discovery is a lacquer panel that was loaned from Maryhill Museum of Art in the state of Washington. It was exhibited in 1915 for the French pavilion at the San Francisco Panama-Pacific International Exposition and credited to Gray but never verified.

The lacquer panel is among some of Gray's earlier works that are shown on the ground floor, alongside a timeline of her life.

Upstairs is a model of the Chateaubriand apartment that Gray designed in Paris with her partner, Romanian architect Jean Badovici.

Also in the exhibit is a model of the waterfront E-1027 house that she and Badovici completed as their holiday home. There are also bedroom screens and carpets from Gray's shop Galerie Jean Désert, which she opened in Paris in 1922.

Born in Enniscorthy, Ireland in 1878, Gray studied at Slade School of Art in London and at Paris' Académie Colarossi and Académie Julian. She moved to Paris in 1910 and founded a textile workshop and studio with her college friend Evelyn Wyld.

Gray's career encompassed a breadth of work, from furniture, textiles, drawings and buildings, before she died in 1976 in Paris.

The exhibition is on view from 29 February until 12 July 2020 at Bard Graduate Center Gallery at 18 West 86th Street in New York.

A book created by Dutch graphic artist Irma Boom and a film called In Conversation with Eileen Gray, based on an unreleased 1973 interview, have been released to coincide with the show.

Photography is by Bruce White.