O4A is a Paris development with a primary school, sports centre and two tower blocks of social housing by architecture studios Brisac Gonzalez and Antoine Régnault.

The scheme is located in the new eco-district of Clichy-Batignolles, a new neighbourhood in the city's 17th arrondissement being built on a former rail yard.

Brisac Gonzalez Architects designed the school, sports centre and the shorter of the two housing blocks, with Antoine Régnault responsible for the additional, taller housing block.

The architects designed a varied stack of forms wrapped in delicate steel balconies.

"We took on the challenge of ensuring that the building's users and the general public at street level would not feel this density and created a sense of lightness and openness," said the studios.

Each of the project's four elements have been designed to have a distinctive formal and material language. Externally, the base is clad in brickwork laid diagonally to create textured elevations. Above, a pale gold-coloured storey, which is finished with vertical fins contains the school's classrooms.

This is topped with a balcony that has diamond-shaped balustrades surrounding a communal roof garden.

Shared amenities for O4A include this communal roof garden, as well as a bicycle repair workshop and a sky terrace.

Towers of social housing sit at either side of the site. 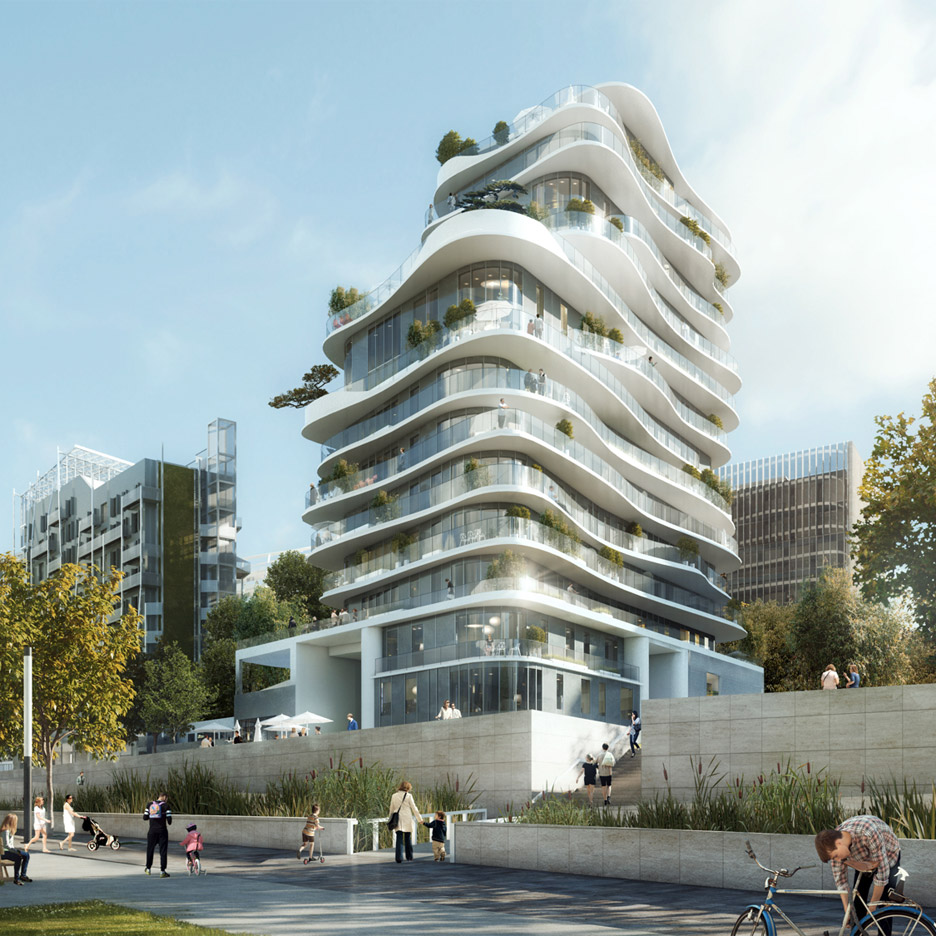 Floorplates of each apartment level are varied, with deeper balcony areas finished with planting or trees.

The concept of distinct identities for the sports centre, school and apartments is continued with the interior finishes.

In the sports centre, bare circulation of concrete and steel are contrasted by themed activity areas.

A dance room is copper-toned, and a martial arts spaces lined by walls with a textured diamond pattern.

Circulation spaces are lined in light wooden panels and floors tiled with gradients of tan and yellow.

Photography is by Jared Chulski unless otherwise stated.