The dark walls of this house in Mexico City were designed by Spanish practice Francesc Rifé Studio to conceal outdoor areas from the street.

The residence comprises two volumes on a triangular site, organised around several patios and access points.

A dark grey wall forms a barrier from the street and lush property inside, and matches the house's grey stone construction.

Black aluminium shutters over windows and allow rooms to be closed off for privacy or opened up for natural light. When closed, the house has a unified look.

AdH House is one of the first buildings by Francesc Rifé Studio, which specialises in interiors such as a lounge at Bogotá airport in Colombia.

The Barcelona studio extended the concept of clean lines and a monochrome palette throughout the house.

Inside, however, the studio chose a paler aesthetic comprising woodwork and cream coloured walls.

Rooms seem either moody and dimly let or bright and airy, depending on the lighting.

"The design of the architecture enabled to develop the same language, based on spatial quality and a deep sense of order for both the interior and the exterior," the studio said. "It is a project thought up from the inside out."

Most of the furniture is by Italian brand Cassina, in addition to custom pieces made by local designer Simon Hamui and some lights are by Viabizzuno.

"The emotional quality of the house also comes from the furniture," the studio said. 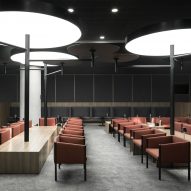 "The clean geometry and serene palette of this house sought to balance the vitality of the owners' art collection," said the studio.

The two-storey residence comprises two volumes. The first contains a stairwell that provides access to the two levels and a basement with a wine cellar and gym.

The stairwell features a black handrail that contrasts with a surrounding off-white aesthetic.

"With almost no visual distractions, neither of form nor of materials, the upper metallic of the railing represents very well the constant aim of the studio to emphasise the details, while a slight separation of the walls of the building makes this element a stage in itself," said Francesc Rifé Studio.

A second, larger two-storey volume contains the remaining functions. Two living rooms, two dining rooms, a kitchen and a terrace are located on the ground floor.

Four bedrooms, each with ensuites, and two living rooms are on the first floor. In total, the property measures 1,500 square meters, with 710 square meters of outdoor space.

AdH House is among a number of properties that have recently been completed in the city's Lomas de Chapultepec area. Taller Paralelo, a PPAA Arquitectos and José Juan Rivera Río are among the architects and studios that have completed other residences.

For Design Week Mexico last year, a villa in the neighbourhood was renovated to host events, while other projects in the area include a sushi restaurant called Oku.