A pair of huge concrete lights drop down over the bar of this restaurant in Mexico City, which was designed by local firm Michan Architecture.

Described by the firm as like legs that are cut off at the bottom, the two structures form part of a trio that are used to punctuate different areas of the eatery.

"The formal structure of the space appears as a faceted cave-like atmosphere which is cut and deformed to adapt to the various necessities of the restaurant," said Michan Architecture in a project description.

"Although the ceiling element is constantly changing it generates a unifying space with a range of unique diverse areas such as an outdoor terrace, sushi bar, and several layouts for seating areas," it added.

The third concrete element stems all the way from the ceiling to the floor to conceal two restrooms.

The concrete wall encloses the main sushi bar, hiding the kitchen behind. The eight-seat bar is made from wood and exposed aggregate concrete, and features a horizontal lighting element grooved into its sides. 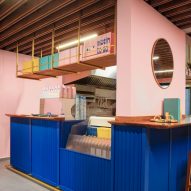 Another glass wall cuts through the main dining area that seats 34 to separate it from an enclosed sunroom that seats 22. Planting creates contrast from the man-made materials throughout the space.

Once lit at night, the space's colour palette and wooden elements emit a "sepia-like ambience", according to the firm in a project description.

Oku is among a number of new restaurants and bars in Mexico City including a pink and blue cafe by creative agency Futura and a glossy bar at the Auditorio Nacional by Esware Studio.