New Stone Age at London's Building Centre shows the potential of stone as a modern construction material. Curator Steve Webb picks five projects from the exhibition that use it in innovative, practical and sustainable ways.

The exhibition demonstrates how stone can be used as a structural material to create contemporary buildings.

"We want to show people that modern methods of fabrication and design can unlock the huge potential of one of our most abundant natural resources," Webb told Dezeen.

"This exhibition sheds light on a number of recent international projects from around the world in an attempt to show that there is a nascent if disparate movement towards stone and postulates what a dawning new Stone Age might bring."

"Stone is beautiful, strong and abundant," he continued. "Its extraction does't require huge amounts of energy, while modern improvements in design and analysis techniques mean that it can be used in ways not thought possible before; playing a major role in building structures."

"We are advocating its use as structure"

The three previous worked together to build 15 Clerkenwell Close, a six-storey housing block in London that has a stone structure. The exhibition aims to widen the discussion about stone as a structural alternative to concrete and steel. 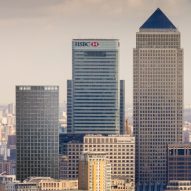 "We are advocating its use as structure and inherent in that is the reductive idea that buildings could be elegant structures built with noble materials, not ugly structures covered in plastic-coated decoration," explained Webb.

Alongside historic and modern uses of stone, the exhibition includes a theoretical design of a 30-storey skyscraper with a stone structure.

"This has the potential to revolutionise construction"

"Steel and concrete are quarried materials themselves that require huge amounts of energy in their production, whereas stone is just sitting there in the ground ready to use," explained Webb.

"Average stones are much stronger than even high-strength concretes, are more durable than many other materials," he continued.

"Although timber is a great way of cutting carbon and can replace many concrete and steel elements, in certain applications such as high rise or underground infrastructure, its use is impractical and stone would be better."

The exhibition also includes an example of a floor slab made from stone that would be much more sustainable than a concrete equivalent.

"The reciprocating stone floor is a thin, un-reinforced stone slabs doing the job of concrete in half the depth and 10 per cent of the carbon," said Webb. "We've never seen this anywhere else!"

"This has the potential to revolutionise construction," he added. "Imagine getting rid of the paraphernalia of concrete construction and replacing it with a standard reusable stone slab, like a paving slab."

Below are five contemporary projects that use stone in interesting ways:

The roof that Crusaders monastery Bethlehem-based architecture studio AAU Anastas created at this gift shop demonstrates the potential of stone to be used to create flat structures.

"This is a really elegant roof," said Webb. "Arch and shell structures are perfect for stone and perfect for statics, but they are of limited use in real buildings, developing flat floor ideas unlocks a lot of possibilities."

The Logements Collectifs social housing complex near Toulouse was built with load-bearing stone walls, which were left bare to show traces of the quarrying process.

Carl Fredrik Svenstedt Architect used CNC techniques to create the walls at this winery in France to give the stone an unusual form.

"The winery, shows the possibilities of combining stone with CNC techniques to produce fluid forms that we don't normally associate with stone," explains Webb.

Elisabeth Polzella's public hall in the of town Lamure-Sur-Azergues combines stone supports with a timber roof.

"Stone and timber is a great combination," said Webb. "At Webb Yates Engineers, we are investigating a number of stone and timber hybrid typologies and we think this is a really interesting area.

The six-storey block at 15 Clerkenwell Close has a structural stone exoskeleton, meaning that the material is immediately visible.

"All of our collaborations with Amin involve some kind of technological adventure and this is no different," said Webb.

"Stone columns support concrete slabs. I've been very interested to see how people respond to the fact of the stone facade being structural."