Carl Fredrik Svenstedt Architect has designed a curving facade carved out of sandstone by a robot for the Delas Frères Winery in France's Rhône Valley.

The winery and wine shop were built next to a historic Manor House, which is one of the many vineyards that cover the terraced hillsides above in Tain l'Hermitage that have been cultivated since the Roman era.

Carl Fredrik Svenstedt Architect used standstone quarried down the river in Provence to create the unique facade. The winery is included in the New Stone Age exhibition at London's Building Centre, which demonstrates projects that use stone as a structural material in contemporary buildings.

"This winery is built to be touched," said the studio.

"The tender, relatively light sandstone is ideally adapted to massive stone construction, being workable and best in thick structural blocks."

Stone blocks, half a metre thick, form a curving main wall for the winery and wine shop that is eighty metres long and seven metres high.

Its shape means it ripples on both the exterior wall facing the garden and on the interior facing the winery.

Each block was carved individually by a robot, wasting the minimum amount of stone.

The offcuts chips were turned into gravel for the winery's garden.

A father and son team of stonemasons then mounted the stone blocks using traditional techniques.

As well as providing a striking and tactile feature wall for the Delas Frères Winery, the porous stone is thermally inert – creating perfect conditions for the wine inside.

The pale stone also deflects sunlight from skylights in the visitors gallery away from the hall where the wine tanks and barrels are located.

Ramps through the winery allow visitors to observe the winemaking process.

At one end the ramps lead up to a roof terrace with views of the vineyards on the hills, at the other it goes down to the cellar under the manor house. 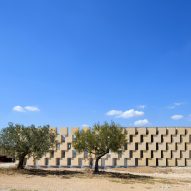 This existing structure has been renovated by Carl Fredrik Svenstedt Architect and turned into a guesthouse for visitors to the Delas Frères Winery.

A rough U shape is formed by the winery, guest house and wine shop, enclosing a landscaped garden.The guesthouse includes a restaurant, tasting rooms and bedrooms that overlook this garden.

A curved section of the  glazed shop facade bows inwards to make space for an existing chestnut tree.

The studio also created a striking stone wall for a winery in Provence, staggering one-tonne blocks to create a gradually perforated facade.

Photography is by DG.